People generally know which objects they call theirs and which they do not. For machines, however, changing functions of objects present an unresolved problem: A laboratory robot does not know which tool currently belongs to which worker. For the first time, the three research areas of the DFKI Laboratory Niedersachsen work together on a solution for this problem in form of dynamic anchoring – and test the new software on robot arms and sailing boats. The aim is an open source module that fundamentally improves the human-machine interaction. The Federal Ministry for Education and Research (BMBF) funds the project CoPDA with roughly 1.3 million Euros. 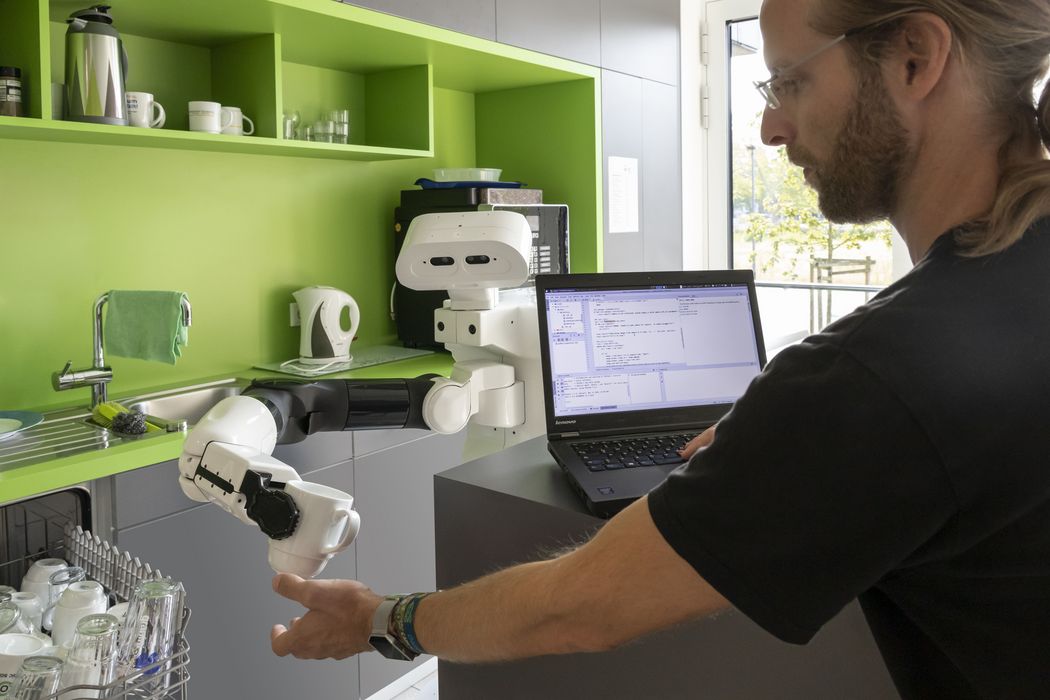 It happens in every office on any given day: As soon as a worker takes a mug from a cupboard, it becomes his or hers for the rest of the shift. While her colleagues are able to automatically register and consider this fact, the functional attribute of the mug presents a complex problem for a machine: A service robot in a laboratory or in a household has difficulties distinguishing many similar looking objects based on their current function. To whom something belongs at the moment, what it is used for and when this attribute does not apply anymore – all this information cannot be deduced by the machine itself.

In order to do so, it requires a so-called dynamic anchor, which connects each mug with a current function: by whom it is used and when the usage ends. The perception of such (partially temporal) object identities is one of the keys to human-machine interaction – whether in laboratories, factories or households. For this reason, the three research areas of the DFKI Laboratory Niedersachsen are working on a fundamental solution for the “comprehensive perception and dynamic anchoring” of such identities in the project CoPDA, which started on 1 January 2020.

The aim of the project is a dynamic anchoring agent (DAA). This agent can be implemented in different robotic systems and creates a temporary connection between recognized objects and its prior knowledge about their characteristics and operating area. Part of the project is finding a definition for how these connections are created and later resolved again. The question here is whether a machine requires a human to let it know to whom an object belongs and for how long, or if it can recognize this by itself – for example via visual signals or its location.

According to the plan of the DFKI Laboratory Niedersachsen, sufficient information on the mug and the possible change of its location and appearance could allow the dynamic anchoring agent to set an anchor by itself and thus enable a robot to automatically bring the correct mug to the correct worker - or the correct family member. Because dynamic anchoring presents one of the basic problems that affect all future areas in which robots and humans work together. For this reason, the scientists are working on a fundamental solution that will be tested extensively and implemented in partner projects of other DFKI research areas. The dynamic anchoring agent will eventually be made available as an open source software for robots and thus contribute to a comprehensive improvement of human-machine interaction.

Before that, it is vital to test the dynamic anchoring in possible areas of implementation. In the first test, a robot arm will register which worker is currently using which tool. The difficult part is the change of location of the tool: the DAA has to recognize the affiliation of a screwdriver even if it is put to a different place without the sensors tracing it. In the second experiment, the agent is put to test in a less controllable environment: A yacht harbour is used to find out how anchors can be set and kept up in large areas with permanent changes. The experiment serves to make the agent applicable in logistical areas such as parking lots or warehouses.

In the first joint project of the DFKI Laboratory Niedersachsen, which was founded in 2019, the three research areas in Osnabrueck and Oldenburg complement each other with their respective expertise. This includes the processing of sensor data of the area of Plan-Based Robot Control (PBR) as well as the implementation of gadgets for the human-machine interaction of the area of Smart Enterprise Engineering (SEE) and the environmental perception and modelling in maritime environments (amongst others) of the area of Marine Perception (MAP). The project CoPDA is funded by the Federal Ministry for Education and Research (BMBF) over a period of three years with roughly 1.3 million Euros.

Photo material:
A press photo is available for download in the DFKI cloud. You may use this photo stating the source “DFKI GmbH, Photo: Annemarie Popp”.