Within the framework of the Strategic Reserach Cluster (SRC) "Space Robotics Technologies", the European Commission is promoting core technologies for a new generation of space robots. These will be used both in the construction of modular and reconfigurable satellite systems, as well as in the exploration of Mars, the moon and other heavenly bodies. In the current first phase of the SRC, the necessary basic technologies will be developed in a total of five parallel R & D projects (so-called "operational grants"). These include an operating system (OG1 ESROCOS), software for robot autonomy (OG2 ERGO), software for data fusion (OG3 InFUSE), a multi-sensor module (OG4 I3DS) and a flexible multifunctional interface between system modules (OG5 SIROM). All technologies are designed for use in orbit (orbital track) as well as on planetary surfaces (planetary track).

The objective of the Space Robotics Technologies Strategic Research Cluster (SRC) funded by the European Commission is to enable major advances in space robotic technologies for future on-orbit satellite servicing and for the exploration of the surfaces of the other bodies in our solar system.

In the current first stage of the SRC implementation, a number of parallel operational grants will be financed, that aim at producing a number of validated common robotics building blocks, which will be re-used and integrated for future space robotics missions.

The OG6 FACILITATORS provides the infrastructure and robotic systems needed for the final tests and verification of the technologies developed in OG1 to OG5. In close cooperation with the teams of the other Operational Grants, FACILITATORS supports both single-system tests and, as far as possible within the limited time frame of the first SRC phase, also tests of integrated sub-systems.

A core consortium consisting of GMV, DFKI, DLR and EADS provides the test platforms and infrastructure needed to test the technologies for the orbital and the planetary track. For the planetary track, an extensive system evaluation in a Mars analogue simulation environment is planned at the end of the project.

The objectives of FACILITATORS are:

In FACILITATORS, the DFKI RIC is responsible for the evaluation of the technologies developed in OG2 and OG5 for the Planetary Track using exploratory robots such as SHERPA and ARTEMIS (both developed at DFKI). DFKI is also responsible for organizing the final Mars analogue simulation.

As FACILITATORS is conceived as a "Federation of Facilities", the network of coordinated, complementary and interchangeable equipped facilities throughout Europe, which are made available to the SRC, can be adapted and supplemented as necessary, e.g. for the validation of the modules developed in the other operational grants or for providing regulated services to the aerospace robotics community beyond this project. 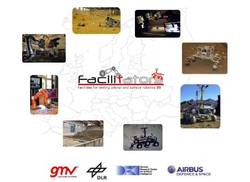