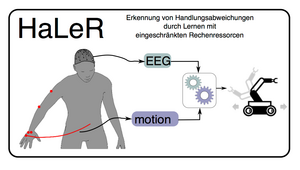 The HaLeR project aims to develop solutions for a flexible and adaptive MMI. The developed methods should allow a system to react and adapt flexibly to human behaviour in case of situation changes. For this purpose, an approach is to be developed that automatically recognizes the connections between individual behavioral segments and adapts them to new, similar situations, so that upcoming behaviour can be predicted in a way appropriate to the situation. Thus, deviations in human behavior are detected and the behavior of the system within a human-machine collaboration is adapted accordingly. This makes the MMI flexible, since the system successfully supports the human being despite changed movement (e.g. changed sequence of behavioral segments). In order to detect human action deviations, both the human's movements are analyzed by means of motion tracking and intrinsic motivations and evaluations of current situations using EEG data. The focus is on methods that do not require large computing capacities. This enables the application of the methods in scenarios with limited resources, such as space missions. By combining the analysis of both data types, an overall system for the detection of action deviations is to be created. This will be evaluated in a space scenario, which allows the investigation on the basis of simplified conditions, as the movements of the astronaut are restricted by the space suit. 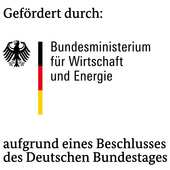