“AI for the benefit of humankind” was the theme of this year's Global Forum on AI for Humanity (GFAIH), which took place in Paris in October as part of the French G7 presidency. Under the patronage of president Emmanuel Macron, researchers from the computer, engineering, humanities and social sciences, innovation drivers as well as representatives from business and politics met for three days to discuss central questions of ethics, security and the legal classification of artificial intelligence. One intention was to develop a common understanding of how the perspectives and challenges of AI can be meaningfully used and mastered. On this basis, a global partnership, the “Global Partnership on AI – GPAI”, is to be further established and its work incorporated into concrete position papers and agendas.

The speakers of the CoCoLAd-Workshop (Human-Machine Co-Creation, Co-Learning and Co-Adaptation), including Prof. Didier Stricker (2nd from left) and chair Prof. Andreas Dengel (8th from left).

Prof. Dr. Andreas Dengel, one of the co-organizers of the conference: “We know that modern AI technologies have the potential to relieve people in many areas of life and to offer a higher degree of automation, but also that dangers can emanate from such systems if used incorrectly. In Paris, an important step was taken towards global networking of experts who, on the basis of jointly developed principles, will actively shape an AI roadmap dealing with these same aspects. It became clear once again that, in addition to technology, many facets and details must be taken into account in the development, introduction and use of AI systems. Transparency, openness or trust are desirable goals in the context of AI. The same applies to keeping people in a controlling position at all times. To achieve this, a diverse and interdisciplinary cooperation is required. I have to distinguish this by the fact that it also discusses and defines social and political developments, goals and strategies on the basis of the current state of research. This is the only way to live ‘AI for humanity’”.

At a meeting with the organisers at the Élysée Palace, Emmanuel Macron took up the impulses of the experts and, in his speech at the conference, reaffirmed the importance of developing human-centred AI systems and the need for international cooperation in global competition.

The conference marked the launch of the Global Partnership on AI, established at the last G7 Summit and led by France and Canada. At the end of the panel, the participants agreed on key aspects which will be set out in writing in a first position paper: 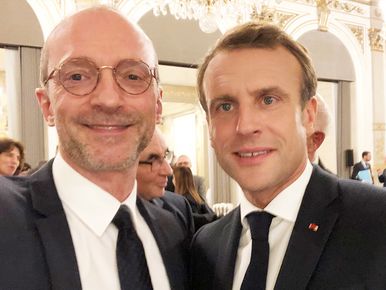