In space, autonomous robots are supposed to fulfil diverse tasks. In order to meet the respective requirements, existing systems are strongly mission-specific. The downside: If the mission requirements change, a completely new development might be necessary. The German Research Center for Artificial Intelligence (DFKI) and the University of Bremen want to initiate a paradigm shift in space robotics with the help of the recently launched ModKom project. By developing a modular system, the usually highly specialized robots are to be replaced by flexible reconfigurable systems, thus, significantly reducing the development effort. 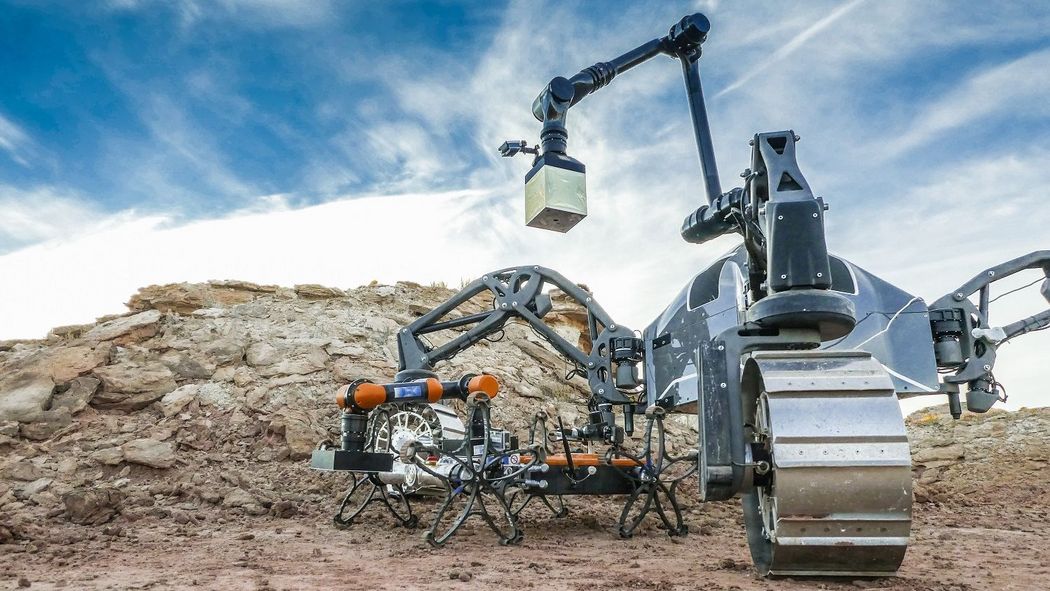 © DFKI, Florian Cordes
The robots SherpaTT and Coyote III during terretrial analog tests in Utah, USA. The systems are equipped with standardized electromechanical interfaces that enable the docking of additional function modules, e.g. manipulators or sensor units, depending on the task.

Robots are playing an increasingly important role in space missions; their tasks range from the exploration of foreign planets and the construction of human habitats to the repair and disposal of defective satellites in orbit. Their use in spaceflight is not only significantly less risky than that of humans, but also comparatively inexpensive. Thanks to artificial intelligence, the systems can act autonomously and react to unforeseen events. However, solutions used to date have been strongly adapted to the respective mission, which is why they are unable to meet changing mission requirements, or only to a limited extent. As a consequence, this sometimes requires the development of completely new systems and, thus, drives up mission costs.

This is where the project ModKom (Modular Components as Building Blocks for Application-Specific Configurable Space Robots) comes into play, which is funded by the Space Agency of the German Aerospace Center (DLR) with funds provided by the German Federal Ministry of Economics and Technology (BMWi). It aims at a paradigm shift in robotic spaceflight: a turn off from the usually monolithic, highly specialized, and mission-specific designed robots, towards systems that can be freely configured for different mission scenarios.

By researching and building a modular construction kit system for robotic space technologies, the Robotics Innovation Center of DFKI and the Robotics Group of the University of Bremen aim to further advance modularization in robotics. The project builds on the comprehensive competencies of the project partners in robotics, in particular on modularization concepts that have been developed in previously conducted projects. In addition, it integrates and further develops technologies that have emerged from these, such as the open-source software framework "Rock" or the electromechanical interface EMI, as well as other hardware and software components.

Development of a modular construction system for space systems

The planned modular system will contain all the software and hardware components that are required in order to build freely configurable mobile robots. The scientists in Bremen are dividing these into different levels of granularity: The lowest granularity level includes, for example, components that provide basic functionalities for system development, such as joints, structural elements or electronic modules. These functional units can be combined with one another using standardized interfaces to form subsystems, which in turn are specified and included in the construction kit at a higher level of granularity.

With increasing granularity, a level of functional units is finally reached that enables the construction of entire systems, e.g. by combining stationary and mobile platforms with sensor units, payload containers or manipulators. Due to an overarching software architecture, these system modules can also be implemented during runtime according to the "plug and play" principle. Interfaces developed in the project will also enable the use of learning and optimization methods to automatically generate suitable hardware and software configurations and adapt individual modules to the overall system.

The advantages of modularization are obvious: amongst others it will be possible to subsequently add functionality to robotic systems that was not foreseen in the early stages of their development. This will enable them to adapt flexibly to the requirements of different missions. The reusability of individual modules and components will also make it possible to significantly shorten development and qualification cycles on Earth and make them more cost-effective.

Due to standardized interfaces or special adapters, even originally incompatible commercially available components and interfaces can be added to the modular system to expand its portfolio and the range of possible applications. Another advantage of modular systems is their greater robustness against failures: Faulty modules can be replaced quickly and easily, thus restoring a fully functional robot. With regard to space applications, this possibility is extremely advantageous, as it is extremely difficult to repair a robot that is far away.

The project partners want to demonstrate the performance of the systematics developed in ModKom by means of a complex mobile manipulation system, which will be realized exclusively using the robotic construction kit. The system is intended to consist of a modular manipulator and an existing mobile purchasing platform. By using commercial components, the researchers intend to show not only how existing external systems can be integrated into the kit but also how flexibly individual elements can be interconnected. The goal of the performance demonstration is to use the end effector of the manipulator to exchange modules for reconfiguration, thus proving the functionality of the modular system.

Last but not least, the aspect of qualifiability is to flow directly into the development of the modular system: As a central module for robotic applications, the scientists want to qualify the DFKI-X joint for use in space. For this purpose, it will be selected and further developed as a component of the modular system in such a way that the broadest possible range of applications is covered, which ultimately achieves optimum added value. The elaborated development and qualification process will also serve to estimate the costs and time required for the qualification of further modules of the modular system and, hence, its practical feasibility for future space missions.

The ModKom project is funded by the DLR Space Agency with funds from the BMWi from July 1, 2021 to June 30, 2024. The funding amount is around 3.2 million euros. 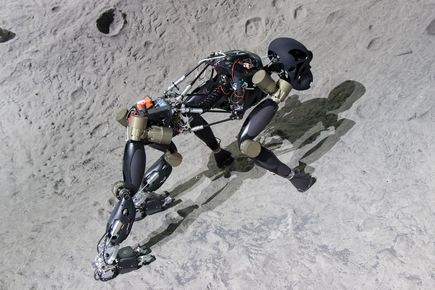 © DFKI, Thomas Frank
ModKom is based on the findings from the iStruct project: Charlie, the hominid robot developed in it, is extremely flexible thanks to modular, biologically inspired structural elements. 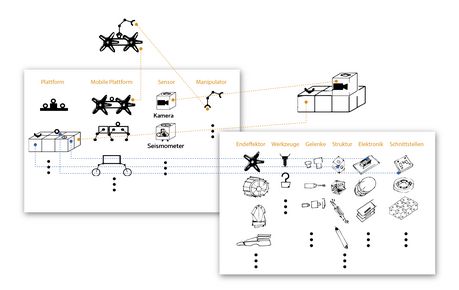 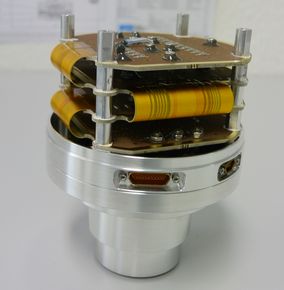 © DFKI
The DFKI-X robotic joint will be further developed in ModKom and qualified for use in space.