When it comes searching life in our solar system, the ice moon Europa orbiting Jupiter plays an important role: Below his ice sheet with a thickness of several kilometers, a deep ocean is suspected which could offer the basis for extra-terrestrial life. The Robotics Innovation Center of the German Research Center for Artificial Intelligence (DFKI) is working on concepts for the investigation of the ocean with autonomous underwater vehicles (AUV). In a follow-up project concentrating on the safe long-term navigation of the previously built team of robots, the scientists took another step towards the real-life mission by developing a new AUV and an improved navigation. 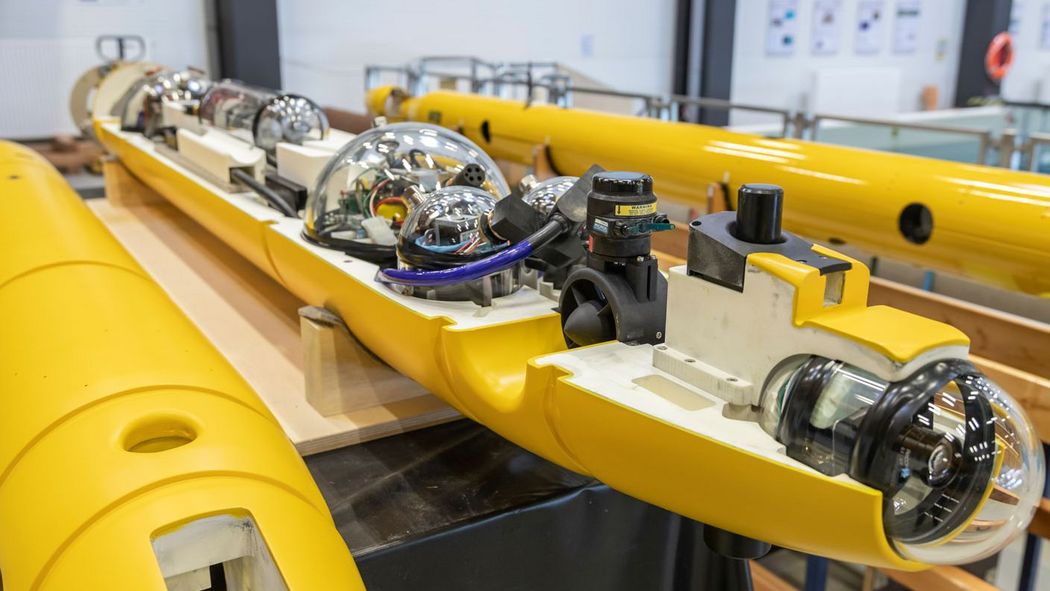 The autonomous underwater vehicle DeepLeng can be seen with an open shell in the underwater exploration hall at the Robotics Innovation Center of the DFKI in Bremen. Credits: DFKI GmbH, Photo: Annemarie Popp

In an average distance of 600 million kilometres, below a sheet of ice with a thickness of up to 15 kilometres, at the bottom of the roughly 100 kilometre deep ocean lying below – at this extreme place, it may be found. Searching for extra-terrestrial life, the hydrothermal vents that are suspected to be found on Europa, one of Jupiter’s several moons, are of great interest. Offering heat and minerals, they may be the basis for a potentially habitable environment for small organisms – much like on the seafloor on earth. In order to investigate the ocean on Europa and the suspected vents, scientists at the Robotics Innovation Center have developed a unique navigation concept as part of the Europa-Explorer project (EurEx), which involves the deployment of fully autonomous vehicles under a closed sheet of ice.

In the follow-up project EurEx – safe long-term navigation (EurEx-SiLaNa), the navigation performance of the robot team, consisting of the AUV Leng and the ice shuttle Teredo, has now successfully been improved via further research and development activities. While the thermal drilling for the penetration of the ice sheet is investigated at the RWTH Aachen university, the researchers of the DFKI were able to transfer the technologies of the AUV Leng for the exploration of the ocean of Europa into a new, enhanced version – the DeepLeng.

The most striking feature of the autonomous underwater vehicle DeepLeng is the new design: The torpedo-shaped system is now one metre shorter and seven centimetres wider than its predecessor. Apart from enhanced navigation capabilities, a simpler cable structure and a decreased need for maintenance, DeepLeng now also offers a payload compartment for the real-life mission. This allows the transport of research equipment such as a microbiological laboratory or a probe collector. In order to prevent the corrosion damages that were registered at the first AUV made of aluminium and steel, the initial plan was to use titanium. However, during the EurEx-SiLaNa project, the decision was made to use glass and plastic. The new material not only prevents corrosion damages, but also lowers the costs and allows a deeper descent.

A further central part of the project EurEx-SiLaNa was the implementation of a mission description language. The mission description of the AUV was initially realized by writing the sequence directly into the source code. This required a rebooting of the system with every mission change. With a new mission management with a defined mission description language, this problem was now solved. Thus, DeepLeng and other AUVs with the same software architecture can connect different functionalities and react to external influences via own decisions.

From the local lake to Scandinavia

DeepLeng was initially tested in the pressure chamber of the Robotics Innovation Center, where the new components were exposed to up to 600 bar – equivalent to a depth of roughly six kilometres below the terrestrial sea level. Furthermore, the sensor technology was expanded and put to test in field trials: The AUV Dagon investigated the floor of the university lake in Bremen using a multi-beam echo sounder (MBES) that subsequently was integrated into DeepLeng. As the two underwater vehicles share the same software architecture, the technologies and the mission description language could easily be transferred.

As a follow-up to the Europa Explorer project, EurEx-SiLaNa was funded with 650 000 Euro by the DLR Project Management Agency with resources of the Federal Ministry for Economic Affairs and Energy (BMWi). The research activities of the DFKI Robotics Innovation Center are part of the EnEx initiative of the DLR, which, apart from Europa, also involves the possible investigation of Jupiter’s moon Encaledus. For the future, the team around Prof. Dr. Dr. h.c. Frank Kirchner plans a follow-up project for early 2020, in which DeepLeng will be completed and then tested under the ice sheets in Scandinavia.

Under https://cloud.dfki.de/owncloud/index.php/s/iJW9bgtA6TTKn25 you can find photos that are available for download. You may use these including the photo credit “DFKI GmbH, Photo: Annemarie Popp”.