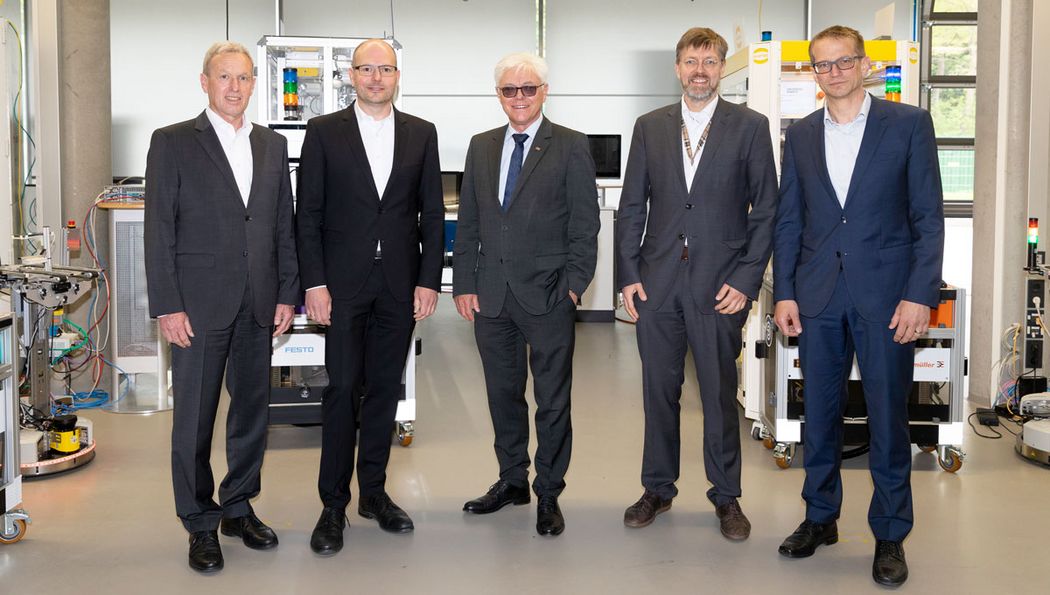 “I thank all of the voting members and look forward to taking an active role in the future as Chairman of the Executive Board at SmartFactory-KL,” said Prof. Dr. Martin Ruskowski. “I will work to advance the goals of SmartFactory-KL just as energetically as my predecessor Detlef Zühlke. The continuous growth of our association proves the relevance of our work in the area of Industrie 4.0. Our vision for 'SmartFactory-KL 2025' represents a concrete plan of what we believe the factory of the future will look like”, he added.

Prof. Dr. Detlef Zühlke has been active as the Chairman of the Executive Board since the establishment of the association in 2005. He now passes the baton of office to Prof. Ruskowski, who just two years ago became the newly appointed Chairman of Machine Tools and Controls (WSKL) at the Technical University of Kaiserslautern and head of the research area Innovative Factory Systems at the German Research Center for Artificial Intelligence (DFKI). Ruskowski studied electrical engineering at the Leibniz University of Hanover, where he obtained his doctorate in mechanical engineering. After holding several management positions in industry, he was responsible for global research and development at KUKA Industries Group prior to making the move to Kaiserslautern.

In appreciation for many years of service to the association, Prof. Zühlke was named an honorary member of the Executive Board and presented with a certificate. "I say thank you to all of the members for their collegial collaboration and untiring efforts over the years. The success of SmartFactory-KL can be attributed to the strong network of industry and scientific research. Although I will no longer be acting as Chairman of the Executive Board of the association, I would like to devote myself to a new vision of a European network of 'Smart Factories'. In this way, I can stay in contact with the latest developments in the industry," said Zühlke.

Dr. Thomas Bürger, Vice President Engineering Automation Systems at Bosch Rexroth, Andreas Huhmann, Strategy Consultant Connectivity and Networks at Harting, and Klaus Stark, Senior Manager Innovation Management at Pilz have been re-elected as members of the Executive Board for the next term of office.

The Technologie-Initiative SmartFactory KL e.V. holds elections to the Executive Board every two years. All regular members of the association are entitled to vote. The job of the Executive Board is to set and ensure the long-term strategic direction. It provides the scientific content, sets the technological roadmap, and determines the thematic priority of effort. The members of the Executive Board also represent the association to all major stakeholders in government, research, and industry. The Board membership is composed of one representative from science and three representatives from industry.

The SmartFactory-KL association currently has a membership numbering 52, with 41 regular and 11 sponsoring members. The membership includes 46 commercial enterprises ranging from regional SMEs to DAX companies with global operations, while 6 of the members are scientific and research institutes from Germany and abroad. Thanks to the involvement of companies from Europe, USA, Japan, China, and Korea, SmartFactory-KL is now very well positioned internationally.

About the Technologie-Initiative SmartFactory KL e.V.
The Technologie-Initiative SmartFactory KL e.V., founded in 2005 as a non-profit association, is an Industrie 4.0 network of industrial and research partners who jointly carry out projects regarding the factory of the future. SmartFactory-KL is a manufacturer-independent demonstration and research platform which is unique in the world. Here, innovative information and communications technologies and their application are tested and developed in a realistic, industrial production environment. The technology initiative, supported by the active participation of its members, has already established pragmatic solutions, first products and common standards. SmartFactory-KL intensively cooperates with the German Research Center for Artificial Intelligence (DFKI) in Kaiserslautern and was appointed Mittelstand 4.0-Kompetenzzentrum Kaiserslautern (SME 4.0 Competence Center) by the German Federal Ministry for Economic Affairs and Energy in 2016. www.smartfactory.de 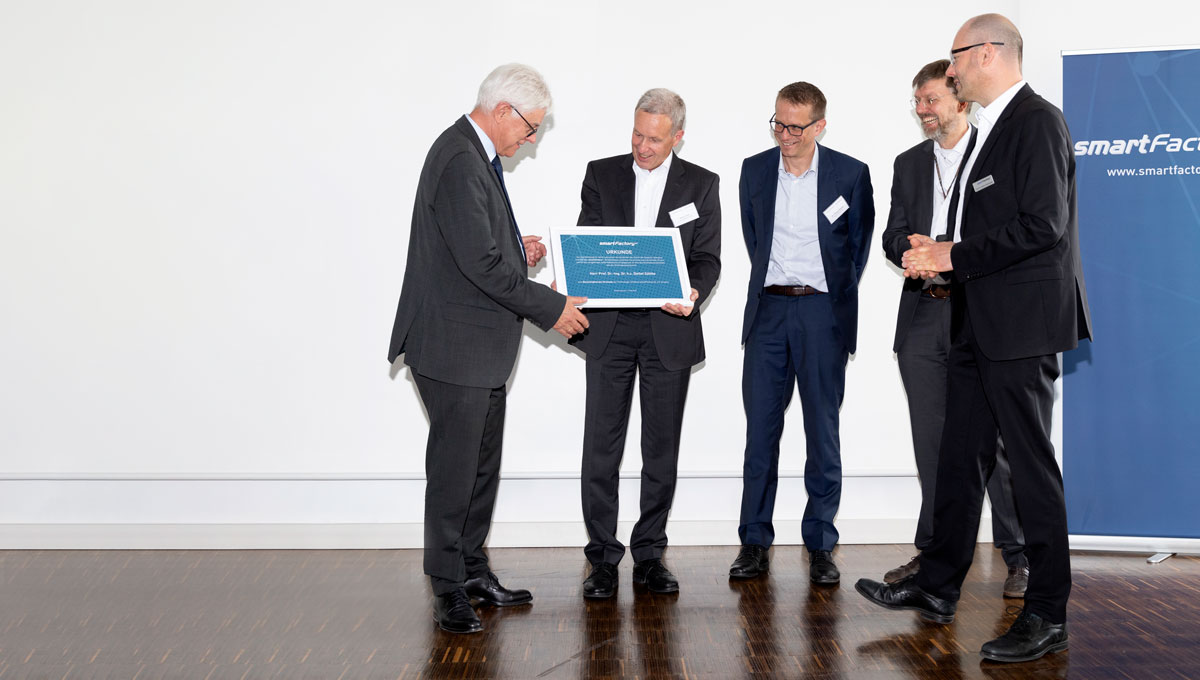 © SmartFactory-KL / A. Sell
In appreciation for many years of service to the association, Prof. Zühlke was named an honorary member of the Executive Board and presented with a certificate.