The Technologie-Initiative SmartFactory KL e.V. and the German Research Center for Artificial Intelligence (DFKI), together with the 18 involved partner companies, will present the further development of the Industrie 4.0 system at booth D 20 in hall 8 at Hannover Messe (Hanover Trade Fair) from April 24 to April 28, 2017. By virtue of using a flexible transport system, a cross-site, flexible production process will be presented.

© SmartFactory KL / C. Arnoldi
he modules of the demonstration system of the SmartFactoryKL partner group is distributed over three production islands to enable flexible production.

The expanded demonstration system of the SmartFactoryKL partner group makes an appearance in a new layout: for the first time, the modules are no longer set up in one line but distributed over three production islands. Products can now be manufactured in different ways because of the use of the flexible transport system comprised of a robot platform as the central element as well as the conveyor belts in the modules.

After the product is processed in four modules according to standardized definitions, the Manufacturing Execution System (MES) uses the information it has received about the plant topology from the Integration Bus to decide where the product is to be transported to for its further processing. While the flexible transport system distributes the product on the Hanover Trade Fair only within a small radius, the system can be applied on different production lines, in different factory halls or even at different production sites in the actual use. Since a product’s decision cycle is controlled by the memory saved in the RFID tag and respectively directed by the applied IT structure, it always finds the right module for the next processing step.

The rearrangement of the Industrie 4.0 demonstration system is essentially based on three standards. They include the RFID tag description that is defined from the data structure and data coding of the product memory based on ISO 15693. This permits that all RFID devices of the system can read the data notably without dependency on any given manufacturer.

The second standard is the OPC UA communication. Via the OPC UA, the docking station reports when a product must be moved. At the same time, each module uses the same OPC UA dataset and passes this on to the server, so that standardized communication among all elements is ensured.

The third point is the standardization of hardware. The docking station which was newly introduced as part of the expanded system can be used flexibly. This is possible because the mechanical basic function of all modules is standardized. For example, the position of each and all conveyor belts is consistently equipped with a compatible sensor system to detect the surroundings.

Use Case originates from the working groups of SmartFactoryKL

The basic skeleton for the expanded Industrie 4.0 system was created in the SmartFactoryKL working groups. “We owe this application case to the round-table collaboration of industry and science. Because the partners interacted at eye level, as appropriate for the spirit of our initiative, they were able to jointly develop these new research topics successfully,” explained Prof. Dr.-Ing. Detlef Zühlke, Chairman of the Board of Technologie-Initiative SmartFactory KL e.V. and Head of the Research Department “Innovative Factory Systems” at the German Research Center for Artificial Intelligence.

The Technologie-Initiative SmartFactory KL e.V., founded in 2005 as a non-profit association, is an Industrie 4.0 network of industrial and research partners who jointly carry out projects regarding the factory of the future. SmartFactoryKL is a manufacturer-independent demonstration and research platform which is unique in the world. Here, innovative information and communications technologies and their application are tested and developed in a realistic, industrial production environment. The technology initiative, supported by the active participation of its members, has already established pragmatic solutions, first products and common standards. SmartFactoryKL intensively cooperates with the German Research Center for Artificial Intelligence (DFKI) in Kaiserslautern and was appointed Mittelstand 4.0-Kompetenzzentrum Kaiserslautern (SME 4.0 Competence Center) by the German Federal Ministry for Economic Affairs and Energy in 2016. 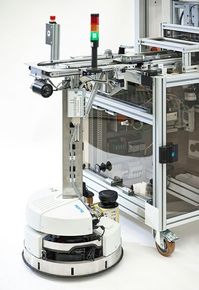 © SmartFactory-KL / C. Arnoldi
Products can now be manufactured in different ways because of the use of the flexible transport system comprised of a robot platform as the central element as well as the conveyor belts in the modules.