The SmartFactory-KL technology initiative will exhibit at SPS IPC Drives in Nuremberg, Europe’s largest trade show for electrical automation. From November 28 to 30, 2017, SmartFactory-KL and the Innovative Factory Systems Department of the German Research Center for Artificial Intelligence will present the latest developments in Industrie 4.0 in hall 10.0 at booth 508. The main focus will be on the technological infrastructure that enables a flexible and agile yet also automated production process. SmartFactory-KL invites visitors to learn about modular assembly, innovative assistance systems, and real time communication and stand and experience Industrie 4.0 networking live. 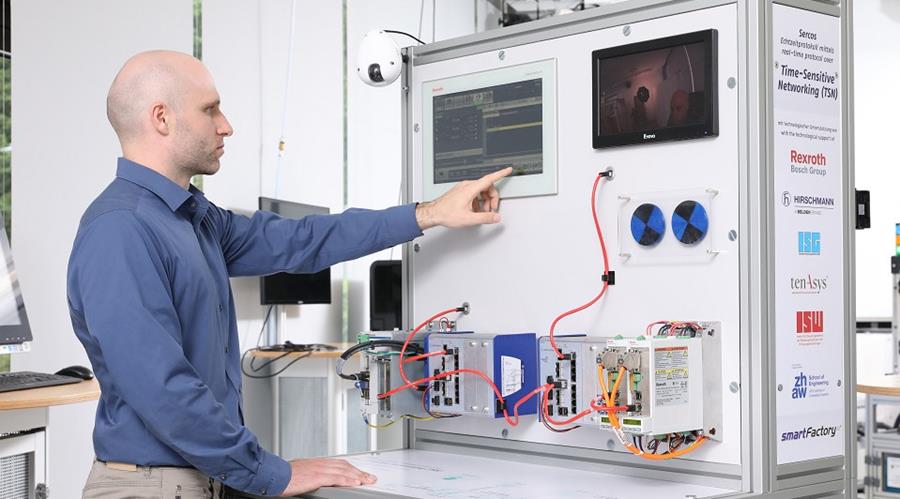 © SmartFactory-KL / A. Sell
TSN caters to the needs of modern IT systems as well as to the real-time requirements of industrial control systems.

One of the main hallmarks of Industrie 4.0 is modular manufacturing. But what happens when changes to the system are required in short intervals? How do you ensure the path of the work pieces through the production sequence? One part of the solution is provided by mobile transport systems. The mobile robot platform of SmartFactoryKL is an agile transport system that enables flexible material transportation. The product is forwarded from the product modules to the manual work station. Thanks to complex sensor systems, motor technology, and wireless networks, this transport unit automatically reaches its intended destination. Thus, a product can automatically be passed along from module to module, even if these are located within locally separated production lines. And, the transport unit is always able to locate the correct production module to ensure a smooth production process.

Which role will workers play in a digitalized, fully automated factory? SmartFactoryKL‘s intelligent manual work station shows how humans and machines will be working hand in hand. The station supports the technicians with their assembly tasks. For example, Augmented Reality systems help to manually perform individual process steps or even the complete assembly process. The advantages are, quite literally, right at hand: The workers receive optimal support in complex manufacturing processes, training, and maintenance tasks. The modular design ensures the manual work station can be customized to the local requirements.

TSN stands for Time-Sensitive Networking. This real-time ethernet variety was introduced as the communication standard for Industrie 4.0-based production. The advantage of TSN? On the basis of TSN, a real-time and multi-protocol network infrastructure can be offered. This caters to the needs of modern IT systems as well as to the real-time requirements of industrial control systems. The use case shown on the demonstrator is the synchronic control of two drives with real-time control data via TSN-Ethernet. Simultaneously, via this TSN network infrastructure, the video streams of a webcam (that could, for example, be used for quality data collection with a machine vision system) are transmitted to a remote display. Real-time communication can be carried out without any disturbances. The TSN demonstrator (Sercos® real time protocol over Time Sensitive Networking) was built with six partners from industry and research.

The Technology Initiative SmartFactory KL e.V., founded in 2005 as a non-profit association, is an Industrie 4.0 network of industrial and research partners who jointly carry out projects regarding the factory of the future. SmartFactoryKL is a manufacturer-independent demonstration and research platform which is unique in the world. Here, innovative information and communications technologies and their application are tested and developed in a realistic, industrial production environment. The technology initiative, supported by the active participation of its members, has already established pragmatic solutions, first products and common standards. SmartFactoryKL intensively cooperates with the German Research Center for Artificial Intelligence (DFKI) in Kaiserslautern and was appointed Mittelstand 4.0-Kompetenzzentrum Kaiserslautern (SME 4.0 Competence Center) by the German Federal Ministry for Economic Affairs and Energy in 2016.
www.smartfactory.de 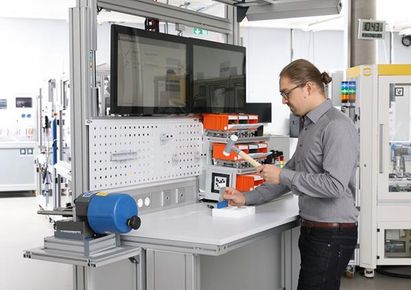 © SmartFactory-KL / A. Sell
An intelligent manual workstation supports the worker with modern technologies