Hitachi, Ltd. (TSE: 6501, “Hitachi”) and the German Research Center for Artificial Intelligence GmbH (DFKI) jointly developed an AI based technology for quantifying physical load on a worker wearing a sensor suit*1 and for providing effective feedbacks on the movement of each body part. This AI technology performs real-time recognition and quantification of physical load exerted on a worker’s body during work by using the motion data of each body part obtained through sensors in wearable devices. This technology makes it possible to provide effective feedback to workers on their differences from the model worker in the movement of each body part. DFKI and Hitachi will use this newly developed AI technology to assist operations and prevent dangerous actions, thereby contributing to ensuring safety, managing health, and improving efficiency on the front line of manufacturing. 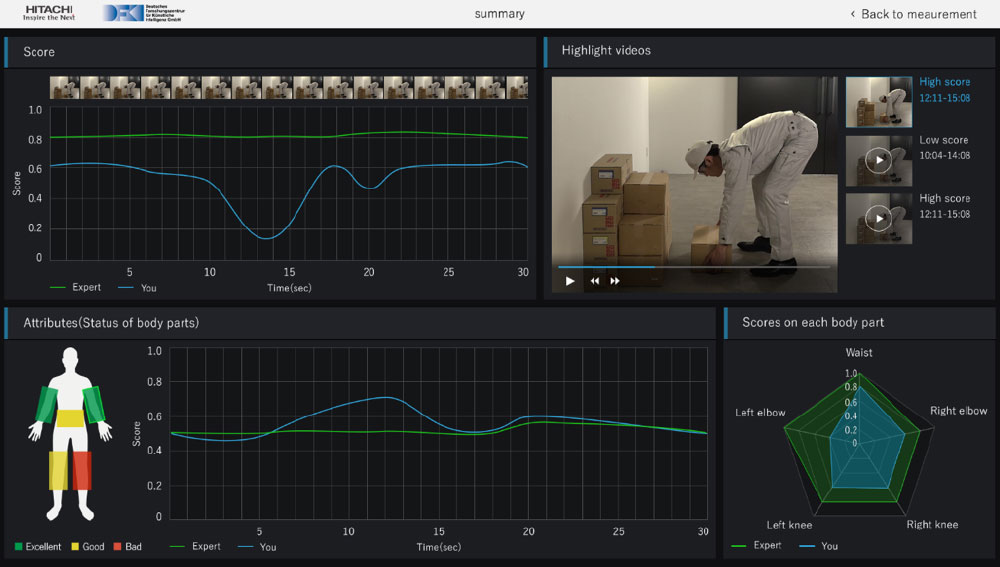 In a society in which skilled labor is in shortage and recruiting new workers is becoming increasingly difficult, maintaining the skill level of workers is becoming difficult in manufacturing industry (e.g. car factories) and in maintenance or carrier businesses. As conscious of ensuring the safety and health of workers in production sites has been increasing, assisting workers in preventing danger and maintaining health is considered very important. To keep workers safe and healthy, it is necessary to know the level of physical load during work. In conventional approaches, fixed cameras are used to recognize workers’ activities. However, since cameras are limited in the range they can measure, it has been difficult to quantitatively and stably assess physical load in complex production sites or outside places where it is hard to eliminate blind spots.

In order to address this problem, DFKI and Hitachi developed new AI based technology that uses the motion data of a worker, measured directly with wearable devices, to recognize and evaluate physical load on the worker’s body. This AI based technology was advanced from the AI based technology developed in 2017*2, which recognizes worker’s activities (e.g. tightening a screw) using quantitative data collected through arm-band sensors and eye tracking glasses in order to prevent human errors. Combination of Hitachi’s human activity recognition technology for industry and DFKI’s Deep Learning technology enabled the development of this AI technology. Features of the new AI driven technology are as follows:

As an experiment, this AI based technology was applied to action to pick up heavy object. The results of the experiment confirmed that it can perform real-time estimation of quantitative values for the physical load of the action. In addition, for actions which contain bad movement, it was confirmed feedback on each body part could be provided, like movements of waist and knees are different from the model worker. Hitachi and DFKI plan to examine the effectiveness of giving instruction for safer operations in production sites with this technology.

Hitachi and DFKI will utilize the newly developed AI driven technology for operation assistance and prevention of dangerous actions in order to contribute to ensuring workers’ safety, managing workers’ health, and improving worker education in various production sites. Also, even though this AI technology was originally developed for workers in manufacturing industry and in maintenance or carrier businesses as a technology to measure and evaluate the movement of a human body,  it is also expected to be applied in other industries such as sports or entertainment in the future. Moreover, drawing on previously developed human activity recognition AI, Hitachi and DFKI will aim to realize more efficient and safer working environment by contributing to the improvement of productivity.

Hitachi has been operating a transfer lab at DFKI in Kaiserslautern since April 2016 with the aim of jointly developing a cutting-edge AI technology of human-activity-recognition for industry. 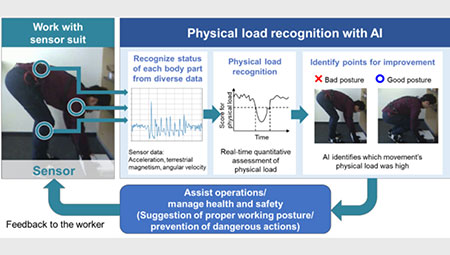