Prof. Andreas Dengel, scientific director and site manager at DFKI-Kaiserslautern received the IAPR/ICDAR Outstanding Achievement Award at the International Conference for Document Analysis and Recognition, ICDAR 2019. Since 1999, the award has been given every two years for special achievements in basic research, student training and applied and industrial research in the field of pattern recognition. The 15th biennial conference was held from September 20-25 this year and attracted about 500 participants. The venue for the event was the International Convention Centre (ICC) in Sydney. 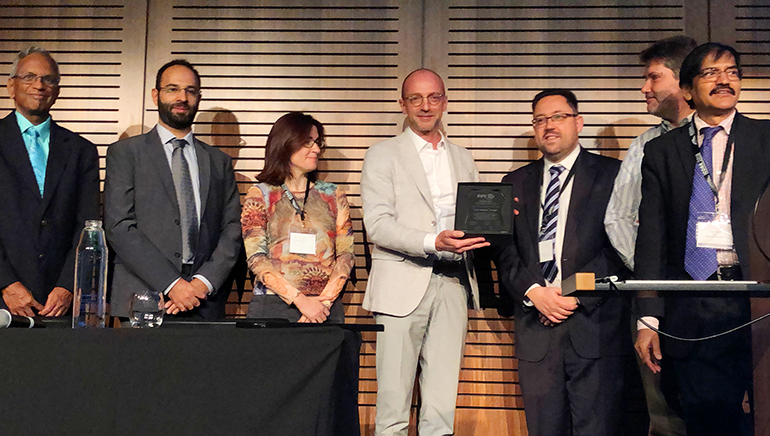 Prof. Dengel was selected for his contributions to semantic reading systems, innovative socio-economic solutions, and his strategic vision and leadership role in the document analysis community.

The importance of document analysis was recently reaffirmed when the German Ministry of Education and Research (BMBF) voted it one of the ten most significant technologies in German AI history. Dengel gained prominence as national leader in this field, not least due to the establishment of numerous enterprises, including Insiders Technologies and b4value.net.

The ICDAR is a very successful conference series founded almost three decades ago and, meanwhile, has established itself as one of the largest and most important international meetings for researchers and users in the document analysis sector. The sponsor and host of the ICDAR conference series is the International Association for Pattern Recognition (IAPR), an international association of non-profit, scientific, and professional organizations that focus attention in a broader sense on pattern recognition, computer vision, and image processing. The IAPR is currently formed by national organizations from 44 countries. The goals of IAPR are to promote pattern recognition systems in a variety of ways, including international cooperation, research and development, dissemination, applications in various domains, and technology exchanges.