On the first anniversary of the Aachen Treaty, the French National Institute for Information Technology, Inria, and the German Research Center for Artificial Intelligence, DFKI, sign a Memorandum of Understanding. The ceremony will take place in Saarbrücken at the Power4Production innovation laboratory in the presence of Tobias Hans, Minister-President of Saarland and State Secretary Heike Raab, Representative of the State of Rhineland-Palatinate to the Federal Government and for Europe, for Media and Digital. 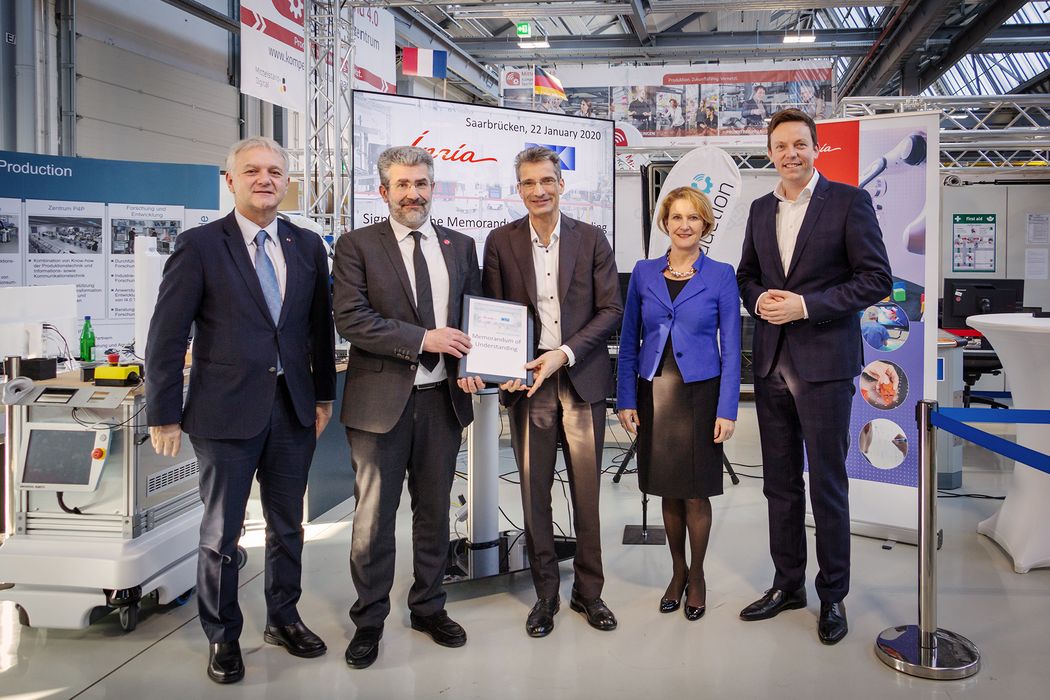 The Aachen Treaty of January 22, 2019, between France and Germany has given new impetus to Franco-German cooperation and also highlighted the partnership in the field of artificial intelligence (AI). Within this framework, Inria and DFKI have now agreed to significantly strengthen their cooperation in the field of AI by structuring and formalizing their cooperation. As a result, a Memorandum of Understanding between Inria and DFKI will be signed today.

Minister-President Tobias Hans declares: "DFKI and INRIA have developed a common vision for the opportunities and challenges of artificial intelligence and digital sovereignty in Europe. The close cooperation of both internationally renowned research institutes is a groundbreaking step towards making Saarland and France a European driving force and center for future technologies such as Artificial Intelligence. This development also shows that Saarland, as an IT location, has an exceptional significance and attractiveness and that our France strategy, which aims to increase cooperation with our French partners, is bearing fruit."

State Secretary Heike Raab notes: "Germany and France are also focusing on people in the research and development of artificial intelligence. AI for humanity is a central aspect of this common vision of values. I am very pleased that DFKI and Inria, as two internationally very important research institutions, will further intensify their cooperation by signing this MoU. For the Kaiserslautern site, this means in concrete terms that cooperation in the field of machine learning and deep learning will be expanded. These are topics in which DFKI already has internationally recognized expertise in Kaiserslautern, which will be further strengthened by the cooperation."

Inria CEO Bruno Sportisse states: "This MoU between DFKI and Inria illustrates the momentum of the French-German cooperation on AI within the European dynamics, following the Aachen Treaty and the recent meeting of Toulouse. Our national plans dedicated to AI promote bilateral partnerships between research organizations from both countries. DFKI and Inria share a similar and open vision about AI and this paves the way for new opportunities in order to strengthen our partnership on concrete projects, both at bilateral and European levels".

DFKI CEO Antonio Krüger explains: "This MoU between Inria and DFKI documents that we are not only talking about the French-German AI cooperation but also actively coordinating research and defining joint projects. We are looking forward to the collaboration because we are bringing together the French and German vision of AI for the benefit of people and society. In both countries, programs have been initiated that fill "l‘intelligence artificielle au service de l‘humanité" and "KI für den Menschen" with content, thus creating value for France and Germany, but also for European society."

DFKI and Inria have a long history of scientific cooperation and dialogue. This dialogue was strengthened in 2019 through bilateral visits and regular high-level meetings, which have led to a shared diagnosis and vision for the challenges of AI and digital sovereignty in Europe.

In the future, the two scientific institutions will cooperate within the framework of a joint strategic research and innovation agenda in the areas of AI for INDUSTRIE 4.0, AI infrastructures, AI and cybersecurity, human-robot cooperation and wearables, and other topics. At the heart of the agreement there is also a strong joint commitment to the European AI initiative CLAIRE (Confederation of Labs for AI Research in Europe, claire-ai.org) to bring European AI researchers closer together and to jointly advance European research for AI that benefits people while respecting fundamental European values.

Specific measures include the implementation of joint research and innovation projects, which partly build on existing projects of both organizations, as well as new topics, which are defined and worked out in joint workshops. Today's signing of the MoU was preceded by a workshop in Nancy on 20 and 21 January with more than 80 participants, in which both institutes explored common potentials and which was the prelude to regular working meetings and exchanges. Selected topics on which these projects will focus are:

•    Trust through Explainability and Certification of AI-Systems
•    Surpassing the language barriers in Europe and the world
•    Breakthrough with AI in Health and Personalized Medicine
•    Better HW/SW infrastructure for AI (e.g., TPUs, FPGA, Quantum, etc.)
•    Application of AI to Sustainability (e.g., Climate)
•    Using AI to improve the competitiveness of European industry
•    Education and training in AI & AI for education and training

The partners are confident that their cooperation on these issues will help build a society that unites the people of Europe, that includes everyone, and uses technology to serve people. In the future, Inria and DFKI intend to work together to advance research programs and activities on a European level in a coordinated manner. Joint proposals have already been submitted under the ICT 48 call for the creation of centers of excellence for AI. A joint steering committee consisting of representatives of the management of DFKI and Inria will define the concrete projects of cooperation and foster their implementation.

About Inria
Inria is the French national research institute for digital science and technology. World-leading research and technological innovation are an integral part of its DNA. Inria's 3,500 researchers and engineers put their passion for digital technology to work in nearly 200 project teams, most of which are joint teams with our academic partners, including the major research universities and CNRS. They explore new fields, often in collaboration with different disciplines and industrial partners, with the aim of meeting ambitious challenges. As a technology institute, Inria supports the development of numerous software products, sometimes making a global impact via the opensource model. Because technology start-ups are powerful channels for research outcomes, Inria also supports entrepreneurial risk-taking and start-up creation (Deeptech). Firmly established on major university campuses and in industrial ecosystems, the Institute is at the heart of the digital revolution.

About DFKI
The German Research Center for Artificial Intelligence (DFKI) was founded in 1988 as a non-profit public-private partnership. In the field of innovative commercial software technology using Artificial Intelligence, DFKI is the leading research center in Germany. Based on application-oriented basic research, DFKI develops product functions, prototypes and patentable solutions in the field of information and communication technology. Research and development projects are conducted in twenty research departments and research groups, eight competence centers and eight living labs. DFKI is actively involved in numerous organizations representing and continuously advancing Germany and Europe as an excellent location for cutting-edge research and technology. At present, 620 highly qualified researchers, administrators and 460 graduate students from more than 65 countries are contributing to more than 250 DFKI research projects. DFKI serves as a stepping stone to leading positions in industry, successful careers as founders of spin-off companies, and academic careers. Over the years, more than 140 staff members have been appointed professors at universities in Germany and abroad. 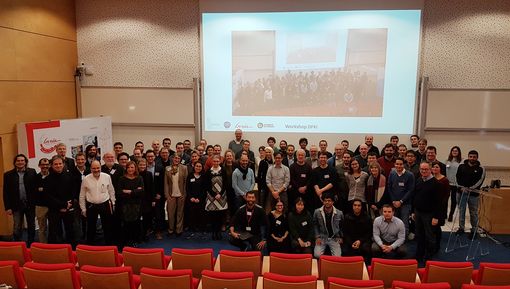