This year, the German Research Center for Artificial Intelligence will be exhibiting at EMO Hannover (16 to 21 September 2019) for the first time. At the joint stand of Konradin Verlag in Hall 9, F32, DFKI will present "FactOpt", a system for dynamic production planning and optimization, and the "Cognitive Manufacturing Lab", a research environment for AI-based production concepts. 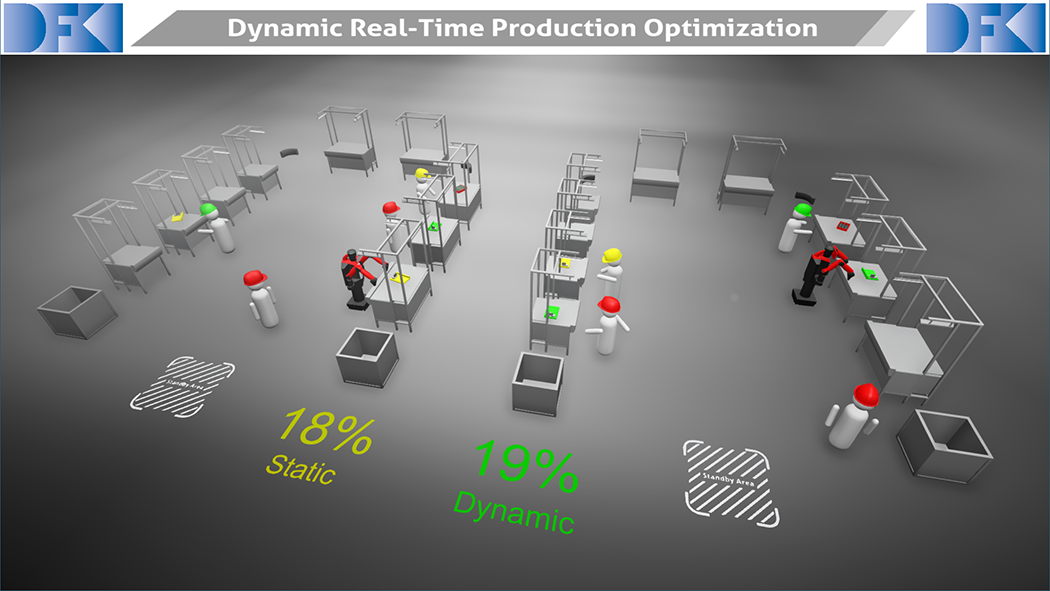 In production on classic mono lines, employees are divided in advance into so-called employee loops. Their task is to work through the individual work steps sequentially from station to station and to transfer the product to be manufactured to a colleague at a defined point. The already completed production planning cannot be flexibly adapted to a large number of product variants or small batch sizes without causing waiting times or malpositions.

The DFKI research department Cognitive Assistants has developed a highly dynamic process for on-the-fly optimization and planning of production systems in real time. "FactOpt" assigns changing tasks to the workers during the running production and still guarantees the optimal utilization of the line under the premise of "Good Work".

The core components are based on the results of the joint projects SmartF-IT and BaSys 4.0, which were funded by the Federal Ministry of Education and Research (BMBF). FactOpt is currently being validated in cooperation with various industrial partners.
"As co-founder of INDUSTRIE 4.0, DFKI has been working since 2011 on making artificial intelligence usable for industrial manufacturing. Now the processes are so far developed that they can also be implemented in medium-sized production companies," says Dr. Anselm Blocher, co-head Software Infrastructure for AI in INDUSTRIE 4.0.

The DFKI research department Smart Service Engineering presents the scientific environment "Cognitive Manufacturing Lab", which is supported jointly with the Laboratory for Machine Tools and Production Engineering (WZL) of RWTH Aachen University. It investigates innovative concepts of AI-based production environments from the point of view of production engineering, AI, and business management in simulated and real environments.

Together, the topics self-adaptive, modular production environments, trust, security and efficiency, especially through Edge AI in production environments, resilience management of production environments and networks, marketplace for trading data products (economy & technology) as well as natural-immersive human-machine communication and cooperation will be researched.
The aim is to bring together a broad-based, excellent research with industrial users. In this way, breakthroughs in the application of Artificial Intelligence in modern production are to be promoted in an interdisciplinary and collaborative manner and put into practice in a sustainable way.

The Exposition Mondiale de la Machine Outil or EMO (Machine Tool World Exposition) is the world's largest trade fair for metalworking. It takes place every two years in the cycle "Hanover - Hanover - Milan". At the world's leading trade fair in 2017, 2,200 exhibitors from 44 countries were present, welcoming around 130,000 trade visitors from around 160 countries.