Today, Robots in space are mostly either passive observers or controlled by humans from Earth. Soon they will have to operate independently and over long periods of time under extreme conditions. In order to meet the high demands on the systems, the Robotics Innovation Center of the German Research Center for Artificial Intelligence (DFKI) is developing innovative hardware and software concepts that it is testing on Earth as part of so-called analogue missions. The scientists will be presenting their research as well as robotic space systems at the DFKI booth (hall 2, booth C59) at the Hannover Messe from 01 to 05 April 2019.

In future space missions, robots will be used for increasingly complex tasks: On foreign planets they shall penetrate into difficult-to-reach areas such as caves and craters, build infrastructure for future base camps, carry out maintenance and repair work on satellites in orbit or remove space debris from the Earth’s orbit. However, remote control of systems from Earth is not practicable, simply because of the delayed communication to distant celestial bodies. That is why future space robots have to become independent actors.

The DFKI Robotics Innovation Center headed by Prof. Dr. Dr. h.c. Frank Kirchner develops autonomous robot technologies for space operation, which are able to perceive their environment comprehensively thanks to a multitude of different sensors. For environment perception, localization, and motion planning, the Bremen researchers rely on AI methods and algorithms, e.g. machine learning methods. These enable the robots not only to act and make decisions autonomously, but also to learn from their own behavior. This is the only possible way to make use of robots on planetary and orbital missions over long periods of time and without human intervention.

In order to be able to penetrate difficult and scientifically particularly interesting terrain on foreign planets, the scientists develop innovative, highly complex and biologically inspired mobility and morphology concepts: from multi-unit walking robots to hybrid systems with leg-wheel constructions and walkable rovers with active chassis to upright and climbing systems in human-like form. Due to their modularity and reconfigurability, these systems can be flexibly adapted to different conditions and tasks. This enables them to carry out demanding space missions alone, in robotic teams or in cooperation with humans.

If necessary, the autonomous robots should also be remote controllable from Earth or the spacecraft. Especially for tasks that require a high degree of flexibility, it may be necessary for humans to intervene in the mission. The DFKI researchers are developing novel teleoperation technologies that are characterized by intuitive operation. For example, remote control can be carried out via a control station using a portable exoskeleton that enables force feedback. In this way, the human operator senses when the system encounters an obstacle and thus feels like being part of the action.

In the future, robots and astronauts will also work collaboratively together in space, e.g. to set up infrastructure. Here, the DFKI research area focuses on different degrees of autonomy: Depending on the complexity of the task, the robot can act more or less autonomously. The astronaut intervenes when the robot does not progress and teaches it new behaviors. To ensure successful cooperation, the scientists are also doing research on new methods of intention analysis and recognition, the results of which could be used in data integration of human emotions and mental states into the robot’s action planning and optimization.

Out of the lab: Practical test for autonomous space robots

In order to ensure that the new technologies function as planned under the harsh environmental conditions on Mars or moon, they are also getting tested outside the laboratory under the most realistic conditions possible in so-called analogue missions. At the end of 2016, scientists from DFKI and the University of Bremen went to the Mars-like desert of the US state of Utah to simulate a complete mission sequence and put the capabilities of the Rover SherpaTT and Coyote III to the test. The aim of the mission was to establish a logistic chain in the heterogeneous robot team in order to autonomously explore the environment and take soil samples. To control the mission, the scientists used a ground control station in Bremen, which established a communication link to the robots in Utah via satellite. Using an exoskeleton, an operator managed to intuitively control the systems from a distance of more than 8,300 km.

In November 2017, a two-week field test campaign led DFKI researchers to the Canary Island of Tenerife. There, they tested newly developed algorithms for the (semi-)autonomous exploration of difficult-to-access terrain, which enabled the CREX and Asguard IV robots to explore the lava caves on the island, which are of great scientific interest for space research. Most recently – from November to December 2018 – the Bremen researchers, together with their European partners, put software developed for space missions to the test in the Moroccan desert. Once again, the DFKI’s hybrid walking and driving rover SherpaTT served as a robotic test platform. Thanks to the new software, the rover covered a distance of more than 1.4 km through the landscape of wide plains, but also steep slopes and gorges.

Robotic technologies for space have an enormous transfer potential: The systems specialized to be used in inaccessible terrain are also suitable for use in extreme and hostile environments on Earth, e.g. in the deep sea or in contaminated areas. In order to achieve the necessary autonomy and thus the ability to act, robots must meet very similar requirements there, especially with regard to their mobility, robustness and learning ability. For example, the Bremen scientists have already succeeded in further developing the SherpaTT robot for a deep-sea scenario in which it can be used as an autonomous underwater rover for sustainable resource extraction or for monitoring and inspecting deep-sea facilities. In addition, they equipped the Coyote III micro-rover with a gas sensor so that in a disaster scenario it can independently explore a building that is difficult to access and detect escaping gas without endangering human life. 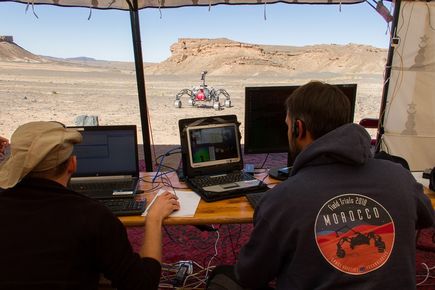 © DFKI GmbH, Foto: Thomas Frank
Experiments in the desert: The researchers tested the technologies developed in EU projects with the help of the DFKI-Rover. 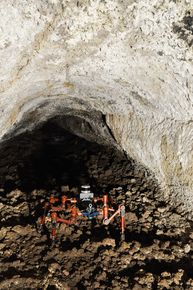 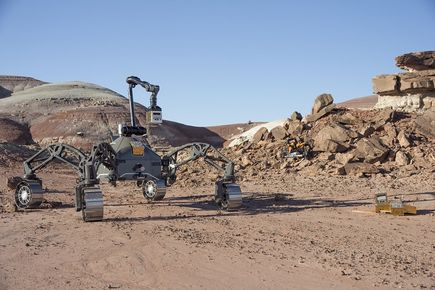 © DFKI GmbH, Foto: Florian Cordes
The DFKI rovers SherpaTT and Coyote III at the field tests in the semi-desert of Utah. 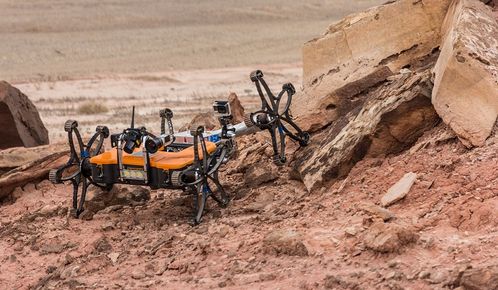 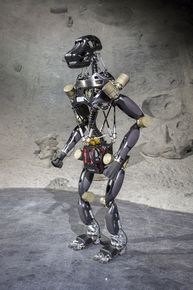 © DFKI GmbH, Foto: Thomas Frank
The four-legged walking robot Charlie in an upright position in front of the artificial crater landscape in the space exploration hall of the DFKI in Bremen.

© DFKI GmbH, Foto: Annemarie Popp
An operator controls the humanoid robot AILA with the aid of an upper body exoskeleton in a replica of the ISS at the DFKI in Bremen. 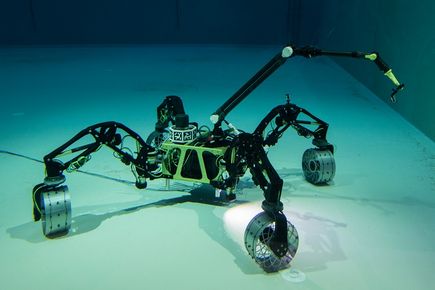 © DFKI GmbH, Foto: Thomas Frank
SherpaTT, further developed for a deep sea szenario, at the bottom of the large saltwater basin of the Maritime Exploration Hall of the DFKI in Bremen. 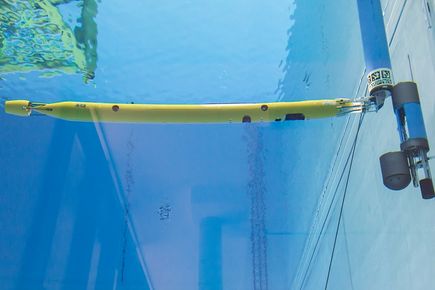