Before space technologies are actually deployed in orbit or on other planets, they must be tested on Earth. As part of the European Union's Strategic Research Cluster (SRC) on Space Robotics Technologies, a consortium of European partners has developed core technologies for a new generation of space robots. Coordinated by the German Research Center for Artificial Intelligence (DFKI), the software developed in the SRC will now be put to the test outside the laboratory, in a four-week field test campaign on the northern edge of the Sahara. 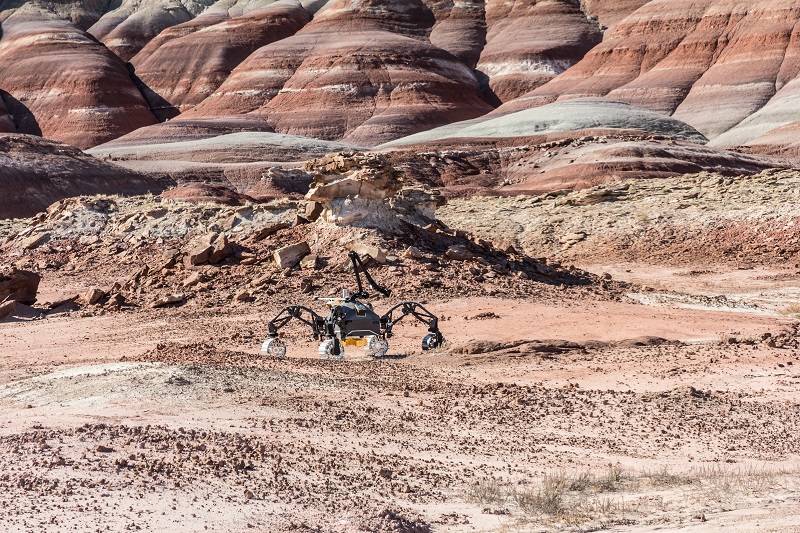 The objective of the Strategic Research Cluster (SRC) on Space Robotics Technologies is to advance European research and development in the field of space robotics. With the participation of the European Space Agency (ESA), the German Aerospace Center (DLR) and the national space agencies of France, Spain, Italy and Great Britain, the Program Support Activity (PSA) PERASPERA outlines the research roadmap of the Strategic Research Cluster and monitors its implementation in currently six subprojects. An important part of the cluster are extensive tests and evaluations of the technologies developed therein. This includes a four-week field test campaign in the Moroccan desert, which is organized by the FACILITATORS sub-project, led by GMV from Spain. The DFKI Robotics Innovation Center (RIC) will coordinate the tests from 15 November to 15 December 2018 with other European partners to validate space software developed in the subprojects ERGO and INFUSE for the first time outside the laboratory under realistic conditions.

On trial: Innovative software frameworks for autonomy and data fusion
In the SRC subproject ERGO, a team of European partners developed a software framework that enables the robust and autonomous operation of robots in the context of space missions. This was implemented using the software development environment for space robots developed in the subproject ESROCOS, in which DFKI RIC was also involved. The consortium of the INFUSE project, which also includes the DFKI, implemented a comprehensive framework for the fusion of heterogeneous sensor data to achieve the most accurate motion planning and navigation of space robots. DFKI’s hybrid walking and driving rover SherpaTT serves as a robotic platform to test the innovative software technologies in the field. SherpaTT is a desert veteran – back in 2016, it already successfully participated in a simulated space mission in the semi-desert of Utah, USA.

The mission: DFKI robot autonomously traverses the desert
The planned field test campaign is inspired by planetary exploration scenarios such as the NASA Mars Sample Return Mission. SherpaTT will use the newly developed software to conduct an autonomous long-distance mission. With the goal to take a soil sample at a remote destination, the rover will travel a kilometer-long route in the Moroccan desert landscape characterized by wide plains, but also steep slopes and gorges. In doing so, he has to plan his own way and react to unforeseen situations, e.g. adapt to changing ground conditions and overcome obstacles.
The schedule

The first phase of the test campaign serves as preparation: integration and repair work is carried out in a workshop near the base-camp hotel. First tests will be done on the nearby natural sand dunes. The research team will then go to the Sahara for the final tests that encompass a complete long-distance mission with SherpaTT. A temporary tent camp will serve as a base and control station during the mission. On 4 December 2018, the press and general public are invited to visit the site and get a personal impression of the field tests.
The Strategic Research Cluster (SRC) on Space Robotics Technologies has been funded since 2014 from the European Union's Horizon 2020 R&D funding program. 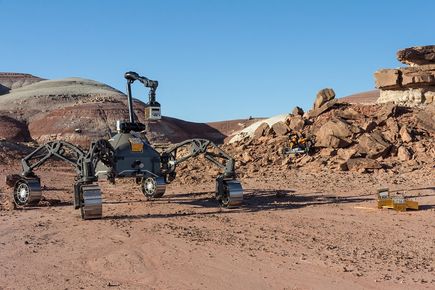 © DFKI GmbH
The rover already successfully participated in a simulated space mission in the semi-desert of Utah, USA.