Space rovers like Zhurong or Perseverance are currently exploring the surface of Mars. However, the systems are unable to penetrate scientifically interesting places such as craters, caves, or rock crevices. Much more suitable are walking robots, which can overcome rough terrain thanks to their flexible locomotor system. In the current ANT project, the DFKI Robotics Innovation Center is working with the Italian Institute of Technology (IIT) and Airbus Defence and Space Ltd (ADS) to develop an innovative navigation system that will enable both four- and six-legged robots to maneuver safely on complex ground. The project is funded by the European Space Agency (ESA). 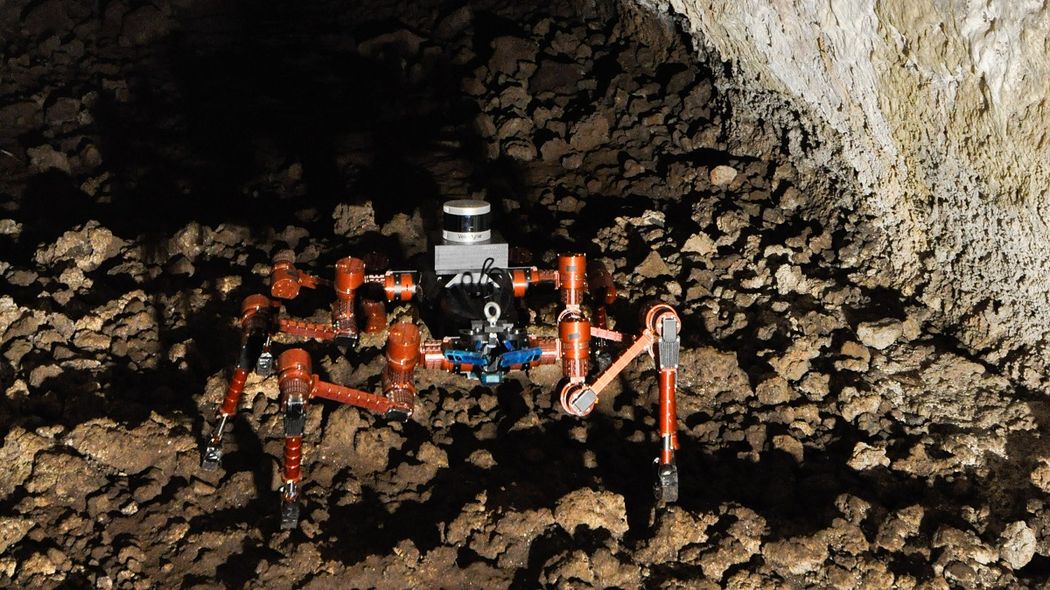 © DFKI
The DFKI walking robot CREX in a lava cave on Tenerife, Spain

In search for extraterrestrial life and potential locations for future human habitats, the hard-to-reach places on alien planets are of particular interest. Caves, crevices, or deep craters offer protection from radiation, meteorites and temperature fluctuations and could hold vital resources such as water ice. However, rovers, i.e., wheeled robots such as those already used in planetary missions today, do not have the capabilities to penetrate complex terrain. Therefore, they are to be accompanied by systems with legs in the future, that can traverse steep and rugged ground thanks to their high mobility. Yet, a powerful navigation system specially developed for walking robots is still lacking.

The ANT ("Autonomous Non-Wheeled All-Terrain Rover") project, launched in January 2021, aims to fill this gap by combining the project partners' extensive expertise in space robotics, autonomous systems, and dynamic walking robots. The goal of the project is to develop a novel navigation system that will enable multi-legged robots to maneuver in challenging terrain such as craters or caves, as well as on slopes or cliffs. The partners are pursuing a modular and generic approach that allows the system to be used on both energy-efficient four-legged and statically stable six-legged robots – depending on the specific requirements of future space missions.

Thanks to the new system, the robot will be able to autonomously perceive the environment, plan a path to a desired destination, and control the execution of the generated motion sequences to ensure stability even in unpaved, sloping, and rugged terrain. The DFKI's six-legged walking robot CREX serves as a robotic test platform in the project. With the help of the developed navigation system, it should climb the artificial crater landscape in the space exploration hall of the DFKI in Bremen, master various inclines and overcome obstacles. In addition, the purchase system AlienGo from Unitree Robotics will be used to test and analyze the transferability of the ANT software to a four-legged system.

The project is divided into four phases, in which the software is constantly improved and equipped with more and more functionalities. The researchers successfully completed the first phase in September 2021. Here, they succeeded in demonstrating omnidirectional movements in a 20-degree slope with CREX. Now they are working on realizing safe navigation on uneven ground. To do this, the robot creates an accurate map of its surroundings and uses it to plan each foot point. At the end of ANT, CREX should eventually be able to independently navigate an uneven slope in the crater. 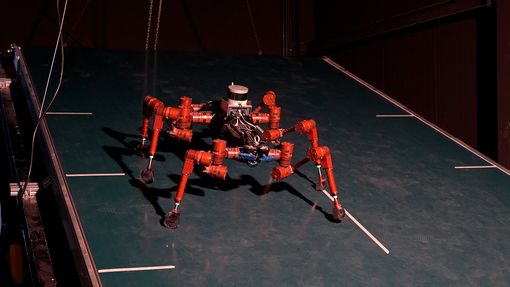 © DFKI, Thomas Frank
CREX navigates in a 20 degree slope in the Space Exploration Hall at the DFKI in Bremen.