Brain-machine interfaces measure the signals of the brain and use them to derive control commands for computers, machines or robots. The German Research Center for Artificial Intelligence (DFKI) is one of the pioneers in the mobile multimodal use of EEG data for interaction with robotic systems. The research project EXPECT (Exploring the Potential of Pervasive Embedded Brain Reading in Human Robot Collaborations) will investigate how strongly EEG contributes to flexible context-sensitive human-machine interaction. Experts from the fields of multimodal interaction, embedded brain reading and interactive machine learning will work together.

In the newly started project, the research departments Robotics Innovation Center and Cognitive Assistants are developing an adaptive, self-learning platform that enables various types of active interaction and is able to derive human intention from gestures, speech, eye movements and brain activity. The project kick-off took place on July 20, 2020 as a virtual event.

DFKI CEO Prof. Dr. Antonio Krüger, Head of Cognitive Assistants and project leader: “In EXPECT, DFKI is bundling competencies and expertise from the fields of cognitive assistants and robotics at its Saarbrücken and Bremen sites. In this way, we are creating a cornerstone for further application-oriented projects based on research into the integration of EEG data in hybrid brain-computer interfaces”.

DFKI is one of the pioneers in the mobile multimodal use of EEG data for interaction with robotic systems. “In the future, AI systems will support humans not only in restricted areas. They will rather act like personal assistants. In order to fulfil this task, it is mandatory that they understand the human being, derive his intentions and provide context-sensitive support. Brain data open up the possibility to give the robot a better direct insight into human intentions. An important application field is, for example, the rehabilitation after a stroke,” says Dr. Elsa Kirchner, project manager for the Robotics Innovation Center.

One of the greatest challenges in human-robot collaboration (HRC) is the natural interaction. In the field of human-computer interaction (HCI), the word “natural” does not describe the interface to the interaction itself, but rather the process of the user learning the various interaction principles of the interface. This learning process should be as easy as possible for the user, based on known (natural) interaction principles such as voice commands, gestures and the like.
This kind of interaction is of great importance in the field of human-robot collaboration. It enables the collaboration to be as efficient as possible and helps to reduce the human collaborator's fear of contact and general distrust of robot systems in everyday work. EXPECT thus has a direct positive influence on the increasing collaboration between humans and robots in the working world.

In order to make this possible, the project develops methods for automated identification and joint analysis of human multimodal data and evaluates them in test scenarios. The systematic experiments also serve the investigation of the question how fundamentally important brain data are for predicting intentions in humans.

Maurice Rekrut, project manager for the research department Cognitive Assistants: ”In the EXPECT project, we are investigating to what extent correlations between different modalities can be found in brain activity in order to make human-robot interaction more intuitive and natural. On one hand we want to design purely brain-computer interface-based interaction concepts and on the other hand we want to create multimodal concepts to provide the best interaction possibilities in every situation”.

The technologies to be developed in EXPECT can be used in a wide range of applications – for example in space travel and extraterrestrial exploration, robot-supported rehabilitation and assistance as well as in Industry 4.0 and industrial human robot collaboration.

Project information
EXPECT is funded by the Federal Ministry of Education and Research (BMBF) within the R&D framework “IKT 2020 – Forschung für Innovationen” under the funding code 01IW20003 with a volume of 1.6 million Euro over a period of four years. 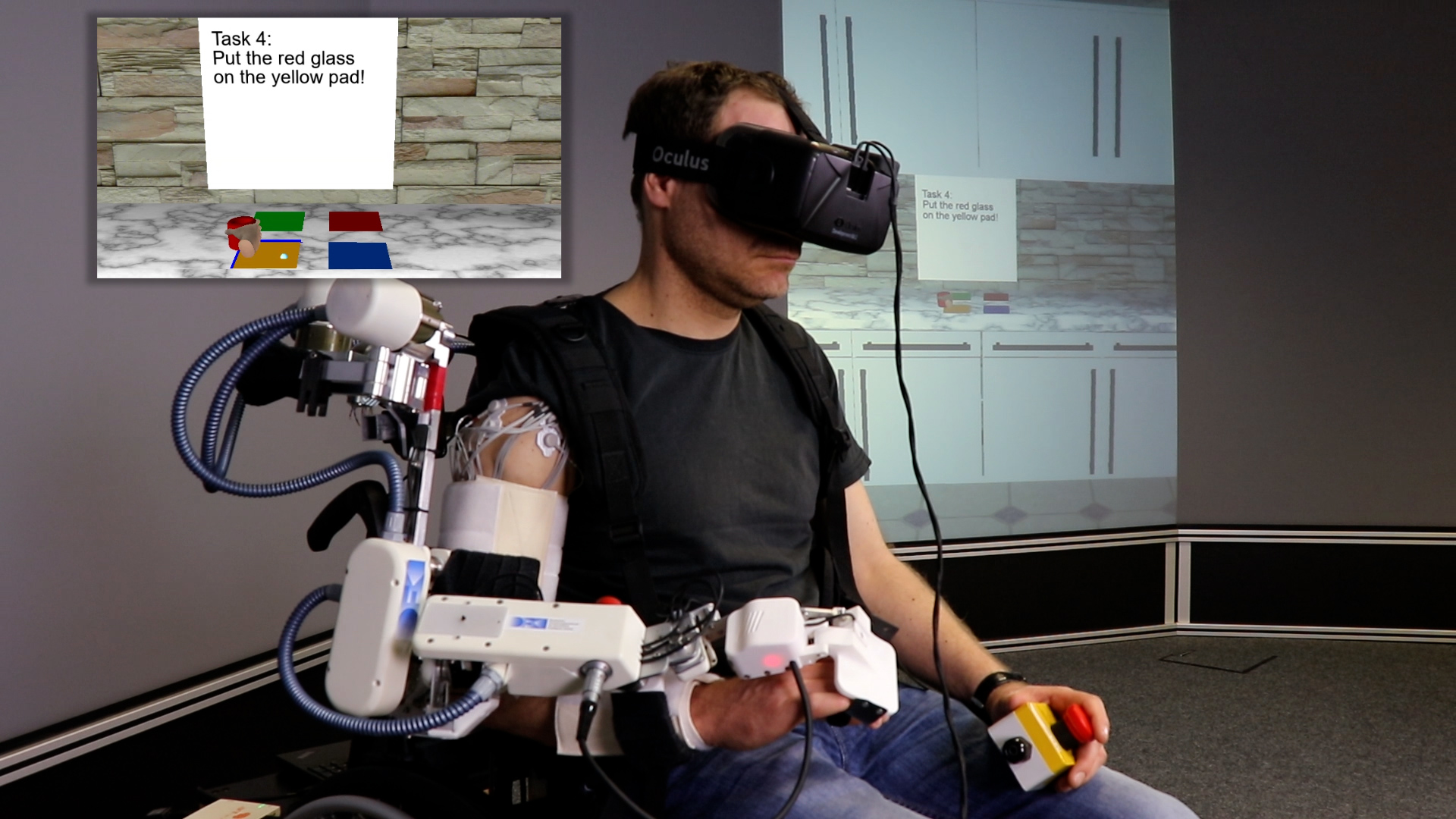 One research approach in the EXPECT project is the use of computer games (serious games) that combine fun and training to support the neurorehabilitation of patients. For example, Serious Gaming can train the eye-arm coordination with VR glasses, eye tracker and exoskeleton. The targeted multimodal use of EEG and EMG together with kinematic data and eye tracking data specifically promotes neuronal plasticity.

The intuitive operability as well as the understanding of a technical system for its users is also of interest in space applications. In the EXPECT project, DFKI is conducting research on systems that are available to humans like personal assistants, e.g. in teleoperation. Through the multimodal evaluation of gestures, speech and EEG, interaction can be optimized and adapted to the individual preferences of the user.