The safety concept is designed to protect people from the risk associated with manufacturing jobs. Increasingly complex, modular Industrie 4.0 production plants demand a new safety concept. Thanks to Artificial Intelligence (AI), it is now possible to make modular work stations much safer. The SmartFactory-KL partner consortium shows how to use AI to minimize the safety risk for Industrie 4.0 production plants at the Hannover Messe on April 1-5, 2019. Learn more at the joint exhibit stand of SmartFactory-KL and German Research Center for Artificial Intelligence (DFKI) located in hall 8, booth D18. 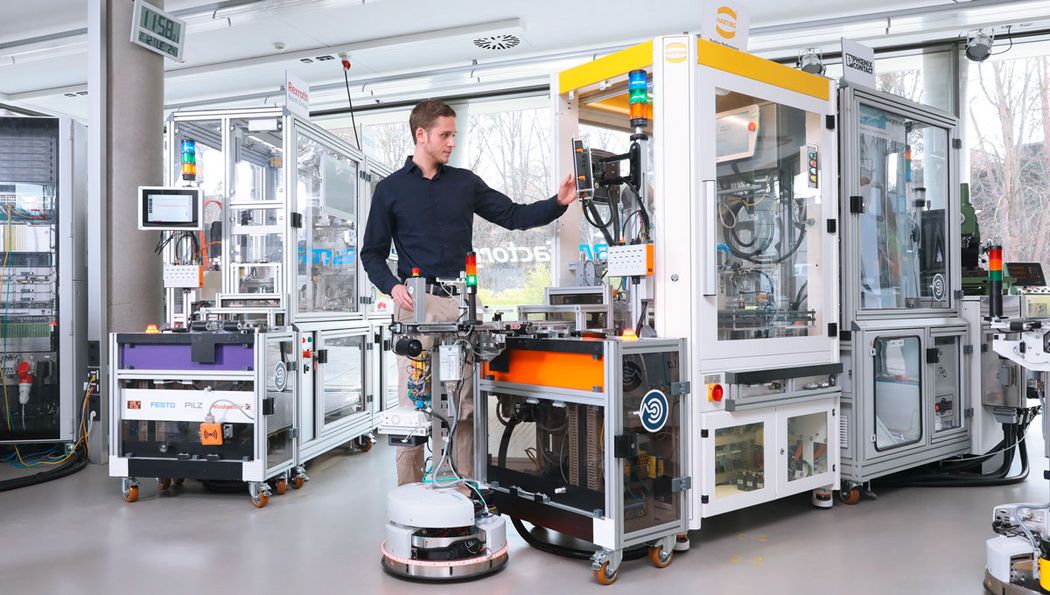 © SmartFactory-KL / A. Sell
AI is used in manufacturing to minimize the safety risks of modular work units. This Use Case is demonstrated on the SmartFactory-KL at the Hannover Messe 2019.

The safety policies must adapt to the flexible processes of the modular plant. The production processes in Industrie 4.0 plants often vary because of the various lot sizes - often at lot size 1. The safety of the production staff is of utmost importance and new policies must be implemented. AI provides an ideal solution to the challenge of minimizing the safety risk at modular work stations. Risks can be detected and the appropriate risk minimization measures can be initiated by adaptive AI algorithms.

“Artificial intelligence helps reduce the safety risk associated with modular work units. In the more complex Industrie 4.0 production plants of the future, such a smart safety concept will be necessary as today's strict safety policies will no longer be adequate for the flexible factories of the future,“ said Prof. Dr. Martin Ruskowski, Department Head of Innovative Factory Systems research at DFKI and expert in the use of AI for manufacturing.

Every equipment manufacturer must provide a declaration of conformity confirming that the unit can manage all hazard scenarios and that the minimum safety requirements are met. In the future, confirming this conformity quickly after each conversion of a modular plant, will require a modular certification concept that checks the entire network of linked systems.

AI algorithms can automatically perform the certification process for the interfaces between two production stations. Using smart software, so called safety agents, will reduce the complexity of the interfaces between linked units. The safety agent checks various scenarios to determine, for example, whether there is a mechanical or a chemical risk. If the risk is negligible, a safety certificate is prepared and the production can continue – avoiding long downtimes in the truest sense of Plug & Produce.

A flexible transport system (FTS) is included in the safety concept of the SmartFactory-KL Industrie 4.0 production plant. In the event that the FTS moves into the zone of a production line, it is automatically assigned to that unit and, consequently, also to the associated emergency stop circuit. Similarly, instead of the transport system, another module component could also be flexibly exchanged and automatically certified by AI.

“The advantage of this solution is the significant reduction in downtime after a plant conversion, because the most expensive and time consuming decisions about plant safety are now performed by artificial intelligence. We demonstrate automatic certification at our exhibit stand,” said Prof. Dr. Detlef Zühlke, Chairman of the Board of SmartFactory-KL.

This use case is visualized using colored light installations. If the vision system has not performed a final risk check, a flashing light on the FTS is activated. After checking for safety risk and confirming the certificate, the FTS becomes part of the safety circuit of the respective production line and the flashing light changes to reflect the corresponding color of the line. Only then can the workpiece carrier approach the FTS. 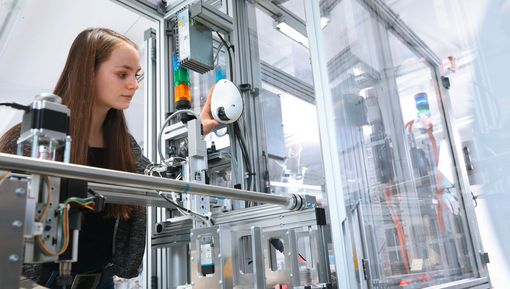 © SmartFactory-KL / A. Sell
A smart vision system is used to check the safety at the production modules (stations). The optical data is evaluated by agent systems and a safety certificate is automatically created.