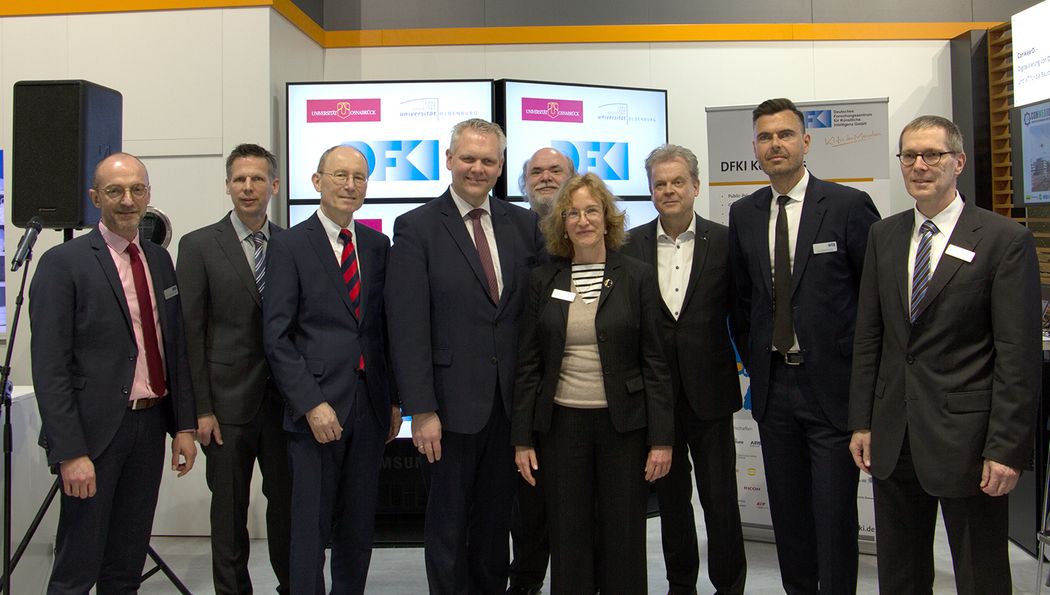 Hannover (April 2, 2019). Lower Saxony invests in research activities in the areas of digital transformation and Artificial Intelligence (AI). The main objective is to expand and further develop the existing field office of the German Research Center for Artificial Intelligence (DFKI) in Osnabruck. Plans call for the establishment of DFKI Lower Saxony Labs with facilities in Osnabruck and Oldenburg. The associated contract was signed by DFKI CEO and Chairperson Prof. Dr. Jana Koehler and the presidents of the two universities Prof. Dr. Wolfgang Lücke, and Prof. Dr. Dr. Hans Michael Piper at the Hannover Messe on April 2, 2019, in the presence of Lower Saxony's Economics Minister Björn Thümler.

The DFKI Supervisory Board approved the new working groups in cooperation with Oldenburg and Osnabruck universities at a meeting in November 2018. The newly created DFKI-Lower Saxony Labs began work on April 1, 2019.
"Our digitalization offensive is enabling the research institutes and universities of Lower Saxony to conduct outstanding basic research, to transfer digital innovation from application oriented research to practical use, and to train the skilled labor necessary for our digital future," said Economics Minister Thümler at the contract signing ceremony. In the context of this offensive, the state government is focused on the funding initiative Volkswagen Foundation Research Cooperation Lower Saxony (Niedersächsische Vorab), which provides around 17 million euros over the next five years for the establishment of DFKI-Lower Saxony Labs.
The research priority is on the environmental perception ability of autonomous systems. Three more research groups will join the existing research group, "Plan based robot control" in Osnabruck as well as locations at the universities in Osnabruck and Oldenburg. "DFKI-Lower Saxony Labs represents an opportunity, together with Saarbrucken, Kaiserslautern, and Bremen, for us to become Germany's largest, independent research institute for artificial intelligence," said Thümler.
DFKI CEO Prof. Dr. Jana Koehler explains: "Artificial Intelligence is present in nearly all areas of our lives and DFKI is one of the most innovative drivers of this technology. Our new Osnabruck and Oldenburg facilities and our partnership with the state of Lower Saxony confirm our commitment to leading research in the fields of robotics, environmental perception, and digital business models, along with applications in agriculture, marine technology, and production. We are pleased with the opportunity to work closely with the small and medium size (SMEs) service providers and manufacturers and the numerous Hidden Champions in Lower Saxony and that DFKI can play a major role in yet an additional federal state in Germany. We thank the state and all partners for so successfully promoting the theme "AI in Lower Saxony."

AI Campus Osnabruck
"Artificial Intelligence will change our lives forever. The key task of the AI Campus of the University of Osnabruck is to transfer groundbreaking technology to practical use in close cooperation with the strong regional economy, while at the same time, presenting this change in the best light possible," said University President Prof. Dr. Wolfgang Lücke. "We are pleased that Osnabruck can provide the opportunity for these two working groups to further the advance of Artificial Intelligence at this location together with DFKI."
Since 2011, the "Plan-Based Robot Control" Group has worked here under the leadership of Prof. Dr. Joachim Hertzberg as a branch office of DFKI. The research subject is the goal-directed actions of robots in a natural environment over long periods and how to flexibly adapt these actions to the surroundings. This demands an ability to evaluate sensor data from the robot's surroundings online for relevant objects and events. While the group's main focus is on agriculture, goal-directed, environment-dependent actions as in human-robot cooperation are also required for flexible manufacturing.
The research subject for the "Smart Enterprise Engineering" Group is the digitalization of the "Mittelstand (SMEs)." The innovation potential of Industrie 4.0 and Smart Services is systematically developed and implemented in business-relevant models such as hybrid value creation and transformed into training scenarios for the digital company. The group uses Artificial Intelligence methods and new technologies like Augmented or Virtual Reality for this purpose. Prof. Dr. Oliver Thomas and his team at the Information Management and Information Systems department at Osnabruck University emphasize the role of AI in the implementation of innovative business models.

Oldenburg's computer science and marine systems
"The DFKI decision recognizes Oldenburg's excellence in computer science and marine technologies. Our researchers, particularly, in the fields of maritime systems, energy efficient transport and production systems, and marine sensor technologies are continuously expanding their already intensive use of artificial intelligence," said University of Oldenburg president, Prof. Dr. Dr. Hans Michael Piper. The close connection between the researchers and the regional economy also facilitates the development of new applications.
Using artificial intelligence, it is possible to gain a comprehensive perception of complex situations and environments such as in production activities or in environmental monitoring. This ability means that autonomous systems will be able to react in an even more goal-directed manner in the future. The "Industry and Manufacturing" Group at University of Oldenburg, with a special focus on production and transport systems, will be headed by the future chair of the "Applied Artificial Intelligence" department, an endowed professorship. The aim is to use AI to capture and analyze the condition status of increasingly digitalized systems. Supporting the development of the new working group is computer scientist Prof. Dr. Axel Hahn, who works closely with the Center for Digital Innovation, Lower Saxony (ZDIN) and the Institute of Information Systems (OFFIS) in Oldenburg.
The second research priority for Oldenburg is on AI for marine sensor systems. The head of the new "Marine Perception" Group is marine scientist Prof. Dr. Oliver Zielinski. The researchers will work on developing flexible monitoring systems that can act autonomously in different situations, for example, in detecting damage to maritime facilities or in combatting pollutants in the water. Researchers are increasingly using AI methods to automatically collect, classify, and verify the quality of data from various sensors used in marine environments.
DFKI was founded in a joint initiative by the states of Rhineland-Palatinate and The Saarland in 1988, as a non-profit organization in the form of a public-private-partnership with offices in Kaiserslautern and Saarbrucken. In 2006, DFKI opened its laboratory in Bremen and in 2007; the DFKI project office began operations in Berlin. The Osnabruck location became a branch of the DFKI Robotics Innovation Center Bremen in 2011. The cooperation with Lower Saxony significantly intensified over the past eight years to the point where now, both scientifically and economically, the next logical step was to organize the Osnabruck and Oldenburg locations to form the DFKI-Lower Saxony Labs.