From 22 to 27 September 2019, a delegation led by the Federal Ministry for Economic Affairs and Energy (BMWi) and the Forum Digital Technologies (FDT visited four exciting cities on Canada's east coast. Relevant stakeholders and institutions in Montreal, Ottawa, Toronto and Waterloo were visited by the group of 17 in order to promote international exchange and to initiate new German-Canadian research projects in the fields of artificial intelligence (AI) in healthcare, networked production and AI technologies. 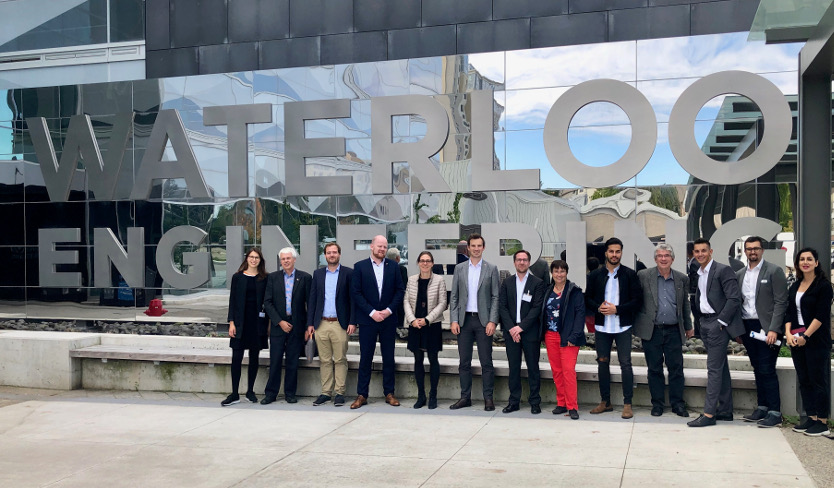 Choosing Canada as the destination for the FDT's first roadshow was an easy decision: there is an excellent basis for cooperation between the two countries, which was formally underpinned as early as 1971 by an intergovernmental agreement on scientific and technological cooperation. Canada is also a pioneering nation, particularly in the field of AI: Canada was the first country in the world to publish a national AI strategy in March 2017. A budget of $125 million was set aside for five years and a clear focus put on the promotion of research and talents. Much has happened in the meantime and Canada has earned a reputation as an excellent research and start-up location in the field of AI. In particular, the three newly created AI institutes MILA in Montreal, the Vector Institute in Toronto and the Alberta Machine Intelligence Institute (amii) in Edmonton have quickly earned an international reputation. On Canada's east coast, there are also excellent universities with research focuses in the areas of AI and health as well as production and robotics. Industry is brought on board especially by the five state-sponsored superclusters.

In addition to the goal of getting to know the Canadian AI ecosystem as well as relevant stakeholders and institutions, each roadshow aims to enable German delegation participants to present their current research projects to a foreign expert audience. Participants of this roadshow were mainly representatives of exciting research projects supported by one of the BMWi's digital technology development programmes. In addition, a representative of a project funded by the Federal Ministry of Education and Research, a representative of a European Horizon2020 project as well as the start-up PANDA, which won an award from the BMWi start-up competition, were also present. Participants from the Charité Berlin, the bbw University of Applied Sciences and the Hasso-Plattner-Institute represented the topic AI in the healthcare sector. Representatives from the Fraunhofer Heinrich Hertz Institute, the Chemnitz University of Technology, RWTH Aachen University and KION, a medium-sized company, took part for the topic of networked production. Representatives of the Dresden University of Technology, Siemens and the Karlsruhe Institute of Technology participated in the roadshow for the field of AI technologies.

The five days in Canada allowed for numerous meetings in which exciting overlaps and complementary topics were detected between the German and Canadian experts. In addition to scientific workshops at MILA and the Vector Institute, the meeting with researchers from the National Research Council was also very informative. With an annual budget of $1.2 billion, nearly 4000 employees and 22 locations, it is the most relevant scientific and industrial research organization in Canada. The delegation also got to know two of the five industry-driven superclusters: One was the logistics-focused Scale.Ai in Montreal, the other was the Next Generation Manufacturing Supercluster from Hamilton near Toronto.

Also noteworthy were the meetings at Canadian universities: At the University of Toronto, four research departments of the Faculty of Applied Natural and Engineering Sciences introduced themselves and made a very good impression on the delegation. The insights gained at the University of Waterloo were also fascinating, with a particular focus on production and robotics. In Montreal, healthcare research impressed, both at the CHUM Hospital and its currently emerging School of Artificial Intelligence in Health as well as the McGill University’s neurological AI simulation center.We were also able to gain an insight into the dynamic startup scene: Firstly, through the Creative Destruction Lab and secondly through the MaRS Discovery District, where large and small companies come together under one roof. The evening receptions organized by the German Consulate in Montreal at the Accelerator CenTech as well as at the residence of the German Consul General in Toronto were a particularly enjoyable.

German Canadian Cooperation will be initiated

The roadshow's dense program provided a variety of insights into Canadian research priorities and institutional structures. In addition, many contacts were established between the German delegation and various institutions in Canada. Through the roadshow, a good common basis was laid for cooperation that will be realized in future bilateral research projects.