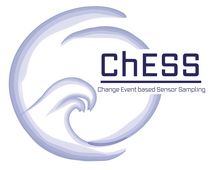 The project aims to accelerate Natural Science research process through part automatization of execution of experimentation by AI powered Change Event based Sensor Sampling (ChESS), e.g. for systems monitoring and investigating biodiversity and ecosystem functioning. The purpose of ChESS is to detect concept changes that may be relevant to the investigation or the health of the ecosystem. E.g., in intertidal marine ecosystems the event of sudden flooding may cause dramatic changes to the biodiversity, and it may also be of scientific interest to take more frequent sensor samples during the time leading up to such events. Here an AI could be developed to detect early indications of a sensor system environment change and trigger more frequent data sampling. In extreme cases such a system can even trigger missions to prevent an ecosystem observation site from damage or destruction. Thus, the objective of the project is to develop an AI system to enable early concept change detection. However, such techniques will not only need to be mapped on Natural Sciences but also extended to cope with the multi-modality of data streams. I.e. a water level sensor on its own may not be enough to predict sudden flooding, only to detect the flood as its already happening. However, a volatile water level combined with a change of the direction of wind, and reports of rain in certain locations, may indicate imminent flooding. Here an AI would need to combine and analyse diverse kinds of data in real-time.