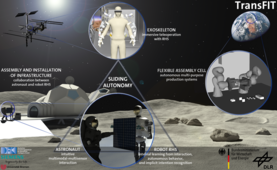 TransFIT is part of the space road map of the DFKI RIC. The project does focus on the assembly and installation of infrastructure for space applications by humans and robots either autonomously or in cooperation. Cooperation between humans and robots follows the concept of ''sliding autonomy''. This means that the control over a robot by a human can be very strong as it is the case during teleoperation, weaker as in case of teleoperation with autonomous control components or can be supervision only in case of ''operator in the loop'' approaches. Goal of human-robot interaction is not only task sharing but further training of robots enabling more complex autonomous behavior.

Requirements for the space application Future space missions will not only include sending scientific equipment close to astronomical objects or even onto planets, moons or astroids using landers and robots, but will further include humans as an important part of the mission on-site. Therefore setting up local infrastructure like stationary camp sites, laboratories or even more complex and bigger module-based structures is required. To prevent unneccessary endangerment of the astronauts being on away missions the usage of robots is obvious. Since robots only have a limited capability of solving complex tasks and only have a limited flexibility in their behavior, a strong cooperation and collaboration with the astronaut is neccessary starting with a general objective for the (semi)-autonomous robots to a direct and intuitive robot control. Like this, the robot is on the one hand able to interact directly with the human, for example holding or fixing a module while the human is assembling a second module, on the other hand another astronaut can teleoperate the robot from the base camp or a space station in the orbit.

An important goal of TransFIT is the development of robot skills which enable the robot to complete complex assembly tasks like grabbing, holding and putting together prefabricated components autonomously or in collaboration with the human. Therefore, the concept of "sliding autonomy" as a dynamic change between fully autonomous behavior, semi-autonomous and cooperative behavior either with the operator in the loop or as a partner and teleoperation will be implemented. Hence, a simple control software is required for a fast adaptation of the behavior on-site and during a mission.

Additionally, the robot should be able to learn new skills from interacting with the human to further optimize his versatility and adaptability to specific requirements. In the final scenario, two robots and at least one human will assemble infrastructure by autonomously putting together parts by the robot, putting together parts in cooperation with a human and also teleoperated by a human. Furthermore we will show that the robots behavior can be easily adapted by an interface to semi-autonomously create installation instructions and by learning skills from observing human behavior.

Transfer in the context of Industry 4.0 The demand for flexible automation is increasing rapidly. Main driver is the ongoing industrial revolution, especially in high wage countries like Germany. This revolution is characterized by constantly increasing numbers of product variants, constantly decreasing product life cycles and, as a consequence, constantly decreasing lot sizes. End-to-end automation using classic approaches is not always feasible in this context, leading to extremely low degrees of automation in large phases of production. One of the phases still executed mostly manually is discrete manufacturing. Automation, using classical approaches, is not cost-effective for large number of product variants due to the associated high engineering costs. New automation approaches need to be developed and tested. One of the main goals of the TransFit project is the transfer of technology developed for extraterrestrial applications into industrial assembly applications. In the project, a highly-flexible, universal and cooperative assembly cell for the manufacturing of complex components will be build for demonstrating this technology transfer.

To achieve the required universality and flexibility, without incurring in high engineering costs, future assembly cells have to be able to execute, autonomously, and in cooperation with the operator, abstract job specifications without the need of detailed programming. These are also requirements for the extraterrestrial assembly and installation of infrastructure. The solutions and interfaces developed in the extraterrestrial scenario should also be applicable in the industrial scenario, where devices with a maximal total weight of 10 kg are to be manufactured in collaboration with a human coworker. The job specification contains assembly steps that, due to the required dexterity can only be performed by the human, and also contains steps that the system can perform with greater precision and repeatability.

The assembly cell has a high degree of autonomy and does not rely on special-purpose tools or sensors. A system-independent semantic description of the process (Bill-of-Process) and product (Bill-of-Material) is given together with a semantic description of the assembly cell including its product-independent skills. The system relies on sensor data to determine its current situation. Using reasoning and planning based on the current situation and the explicit knowledge, the system is able to compute a sequence of actions for assembling a given product. These actions consist of a high-level representation of the capabilities or skills of the system. The system and the human coworker carry out the assembly task together. If one of the steps cannot be executed by the system, then the human is indicated what to do in order to carry out the step.

In summary, the following objectives will be targeted in the project:

Development of hardware and software solutions for a safe human-machine cooperation using a demand-driven sliding autonomy. Development of knowledge-based technologies for robot control and environment perception for the application of setting up an infrastructure. Development of a semi-autonomous assistency system for an intuitive human-machine-interaction supporting the astronaut depending on his/her current situation and based on automated feedback approaches using psychophysiological data. Increase of the autonomy of robots based on online-learning for behavior optimization, automatic adaptation to hardware changes and learning from interacting with the human ("operator in the loop" approach). Transfer of the developed technologies into the context of industry 4.0 with the aim of an interactive and flexible assembly cell.

To the publication
Alexander Fabisch