As part of his state visit to the Czech Republic, German President Frank-Walter Steinmeier and his wife visited the RICAIP Centre at the Czech Technical University (CTU) in Prague on Aug. 27, 2021. The centre is a result of the Czech-German INDUSTRIE 4.0 cooperation. At the Czech Institute for Informatics, Robotics and Cybernetics CIIRC CTU, the German President experienced innovative research projects in the fields of robotics, artificial intelligence and INDUSTRIE 4.0. One highlight was the live broadcast of a practical example of human-robot cooperation in distributed production from the RICAIP testbed in Saarbrücken.

The Research and Innovation Centre on Advanced Industrial Production - RICAIP - connects industrial testbeds in the Czech Republic, specifically at CIIRC CTU and CEITEC BUT in Brno, with the testbed of the German research institutions DFKI and ZeMA in Saarbrücken. As a result, the experimental workplace Testbed for INDUSTRIE 4.0 at CIIRC CTU has been equipped with the latest technologies for smart factories from European and national funds during the last year and a half.

"The opportunity to welcome the president at CTU is a great honor for us and a confirmation of the importance of our workplaces for the development of international cooperation in the field of INDUSTRIE 4.0," said Rector of CTU Vojtěch Petráček.

"The visit of the German president today is symbolic for us. Five years ago, almost to the day, in the presence of German Chancellor Angela Merkel, we signed the agreement on scientific cooperation with Prof. Wolfgang Wahlster, former director of DFKI," pointed out Prof. Vladimír Mařík, scientific director of CIIRC CTU. "I am pleased that, after five years of hard work, we can present, in the same place, concrete results of our RICAIP Joint Centre, which transcend the borders of our two countries and demonstrate strong cooperation in INDUSTRIE 4.0 at a truly international level."

The German president saw a total of six robotic experiments in the testbed, some of which were prepared in cooperation with industrial companies. He was welcomed, among others, by Prof. Radimír Vrba from CEITEC BUT and by Prof. Michael Valášek, on behalf of the Faculty of Mechanical Engineering (FME CTU). FME participates in building the testbed and cooperates in connecting education with industrial applications.

“Both large multinational companies and Czech start-ups are involved in joint projects," said Ondřej Velek, director of CIIRC ČVUT. "Together with the companies, we are developing innovative solutions that can help transform Czech industry towards higher value-added production, especially in small and medium-size enterprises.”

The meeting with the German president was attended by partners of the National Centre for INDUSTRIE 4.0, namely Eduard Palíšek, CEO of Siemens CR, Michael Oeljeklaus, Member of the Board of Directors of Škoda Auto, and José Perdomo Lorenzo, CEO of T-Mobile Czech Republic and Slovak Telekom.

"The demonstrations that we prepared for the president's visit cover a wide range of research of our teams at CIIRC CTU and within RICAIP," said Tilman Becker, RICAIP director. "For example, with the DFKI team, we remotely connected the operator in Prague with the robots in the testbed in Saarbrücken to verify the feasibility of the principles of distributed production as well as remote human-robot cooperation."

RICAIP - Research and Innovation Centre on Advanced Industrial Production - is a newly-established international distributed research centre of excellence (CoE) based on a strategic partnership of four major Czech and German research institutions. The founding partners are CIIRC CTU, CEITEC BUT, DFKI (Deutsches Forschungzentrum für Künstliche Intelligenz) and ZeMA (Zentrum für Mechatronik und Automatisierungstechnik), with its seat in Saarbrücken.
RICAIP focuses on research in artificial intelligence (AI), machine learning, and robotics for advanced industrial production. It develops new production concepts for geographically distributed production and production as a service. The centre will connect the testbeds in Prague, Brno, and Saarbrücken and will enable quick adaptation of production according to the current needs of the customer or available means of production. RICAIP was prepared in two phases within EU Horizon 2020 calls under the title WIDESPREAD Teaming, and in the second phase it was evaluated in 2019 as the 2nd best project. The overall funding received for the period from 09 / 2019 to 12 / 2026 amounts to EUR 48.25 million. RICAIP is currently one of the EU's largest running projects in the field of AI and INDUSTRIE 4.0. RICAIP also provides support for small and medium-size enterprises and facilitates the transfer of technology and knowledge from academia to industry. 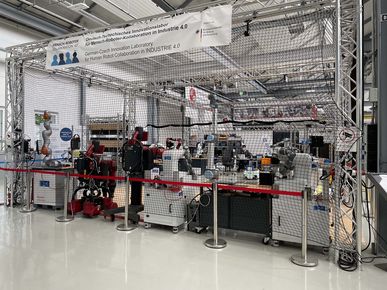 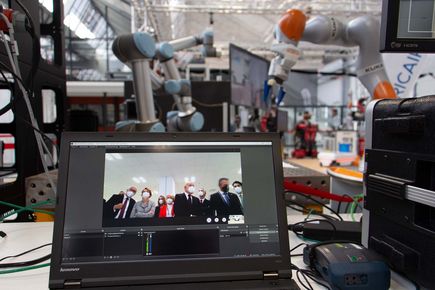 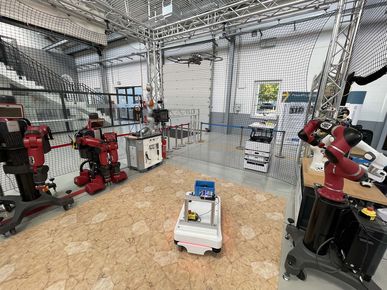