Prague. Virtual and augmented reality for remote industrial production control or a system for its rapid adaptation according to the customer's current needs and available production resources- these are just a few challenges that will be treated by researchers in the RICAIP project. Festively launched today at CIIRC CTU in Prague, in the presence of more than a hundred distinguished guests, RICAIP pushes the boundaries of today’s understanding of the automated industrial production towards the multi-site flexible production.

The decision to support RICAIP (Research and Innovation Centre on Advanced Industrial Production) came from the European Commission this spring, the project officially starts in September. In the next more than six years, the RICAIP partners will have access to funding of up to EUR 50 million (CZK 1.2 billion). Thanks to this support, the European Centre of Excellence for advanced industrial production, the largest in the field of artificial intelligence (AI) and industrial robotics, will be created. It is based on a strategic cooperation between the Czech Republic and Germany. Partners of the project are: its main coordinator CIIRC CTU, CEITEC BUT, and on the German side, the German Research Center for Artificial Intelligence (DFKI) and the Centre for Mechatronics and Automatisation Systems (ZeMA), both located in Saarbrücken.

Jean-Eric Paquet, Director-General of the European Commission, stressed that obtaining this support is an appreciation of the exceptional quality of the project under evaluation, and also pointed out that only one in 15 of the submitted generally high-quality projects received funding from the EU. He said this two days earlier in Brussels at the solemn signing of a document by which the EU allocates EUR 15 million to build the RICAIP Centre of Excellence and 13 other award-winning projects.

“It is an important project supporting both the National Innovation Strategy and the National Strategy for Artificial Intelligence. It is fully consistent with the EU's efforts to strengthen research in the field of industrial production by taking advantage of research results generated in the field of AI, ” said the Minister of Industry and Trade Karel Havlíček in his video message. “I am convinced that the project will provide significant support for SMEs while becoming a tool both for an effective extension of cooperation with German partners and increasing of our contribution to the EU's production potential development,” he added, assuring on the project's importance and full support from the Czech government.

Professor Wolfgang Wahlster, one of the founders of the Industry 4.0 concept and the initiator of the RICAIP project, also attended the ceremony. On this occasion, the former director of DFKI and its current Chief Executive Advisor received the CIIRC CTU Medal, together with Dr. Eduard Palíšek, CEO of Siemens Czech Republic, who was awarded for a long-term cooperation and contribution to the development of the Czech industry.
“Industrial AI for Industrie 4.0 is the innovation motor for the Czech and German national economies,” claimed Professor Wolfgang Wahlster and explained further: “And this is because both depend heavily on the export of high-quality, leading-edge physical products as the basis for smart services and new business models. Together with our Czech friends and cooperation partners at CIIRC CTU we will do our very best, that RICAIP will become the "Mecca" for Industrie 4.0 enthusiasts.”

Professor Jana Koehler, the new DFKI CEO since February this year, added: “The digital revolution paves the road to intelligent products and production with greater flexibility, significantly less resource consumption, and higher degrees of customer-centric individualization. RICAIP will be a driving force and enabler of this revolution for the Czech and German economy.”

“The newly built RICAIP Centre has a truly European format and will serve to research in the field of intelligent manufacturing across Europe. Of course, a significant part of the capacity will strengthen the modernization of Czech SMEs. Also important is the fact that RICAIP will contribute to the expansion of modern education of students and PhD students at CTU and BUT,” said Professor Vladimír Mařík, Scientific Director of CIIRC CTU.

Since the very beginning, the RICAIP Centre has focused on strategic international partnerships. An important cooperation exists with CLAIRE, the world’s largest association of AI research groups and institutes and the most dynamically developing European AI research network. In just a year since its foundation, CLAIRE has won the support of thousands of scientists in 34 countries. Professor Holger Hoos from Leiden University in the Netherlands and one of the founders of this initiative symbolically opened the CLAIRE Prague office at CIIRC CTU. He pointed out: “CLAIRE and RICAIP are highly synergistic, and having a strong presence of both organizations here in Prague is good for the Czech Republic, and better yet for Europe.” By now, RICAIP and CLAIRE are connected not only through the common challenges in the field of AI but also by the CIIRC CTU premises in Prague – Dejvice. 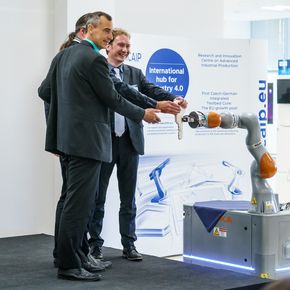 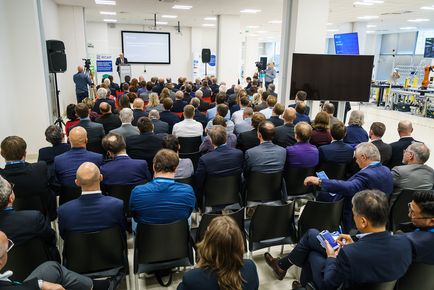