Protection from cosmic radiation, possibly even water deposits – the lava caves on the moon are of great interest when it comes to suitable locations for long-term lunar missions. To investigate their potential for space travel, robots are intended to penetrate the subsurface in the future. In the CoRob-X project, a European consortium led by DFKI is exploring how a team of several autonomous rovers can cooperate on exploration and reach the caves by roping down a robot. At the end of the project, the project partners will travel to Lanzarote to test the complex mission in extensive field tests. 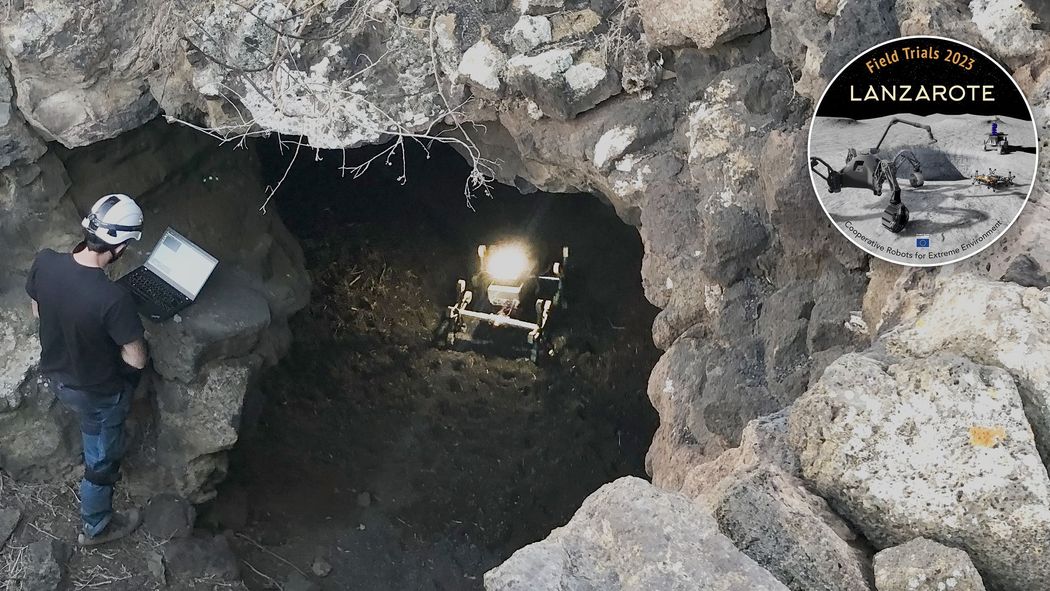 A fixed station on the moon that can serve as a starting point for further exploration of the moon but also of our solar system is a crucial goal of international spaceflight. Optimal conditions for this could be found above all in hard-to-reach environments such as craters or lava caves. Not only do they offer protection from radiation, meteorites, and temperature fluctuations, but they presumably also contain important resources such as frozen water. However, before humans venture into the depths of the Earth's satellite, these promising locations are to be investigated by autonomous robots.

But how do robots enter the caves? In the CoRob-X (Cooperative Robots for Extreme Environments) project coordinated by the DFKI Robotics Innovation Center, nine European partners have been investigating an ambitious exploration concept based on the cooperation of heterogeneous robot systems since March 2021. The project is one of the final projects of the Strategic Research Cluster (SRC) "Space Robotics Technologies", which comprises several research projects funded under the Horizon 2020 program of the European Commission and supervised by the PERASPERA Programme Support Activity. CoRob-X focusses on testing and validating technologies developed in the SRC that will be used in future space missions and enable robots to work as a team in the lava cave scenario.

To prove the feasibility of the exploration concept, about 25 project members will travel to Lanzarote from January 21 to February 11, 2023. After almost two years of intensive research and development work as well as several weeks of integration activities last September at DFKI in Bremen, they want to put the functionality of their technologies to the test in extensive field tests. Thanks to its vast lava tunnels the volcanic island offers ideal conditions in a realistic environment . The two DFKI robots "SherpaTT" and "Coyote III" as well as the robot "LUVMI-X" provided by the Belgian company Space Applications Services NV/SA will be used, which have already started their journey to the Canary Island by ship in mid-December.

The mission scenario calls for the three autonomous rovers to jointly investigate the entrance to a lava cave, the so-called skylight. A sensor cube that the LUVMI-X robot shoots into the skylight enables them to collect and exchange initial information from inside the cave. Using this data, the systems determine a suitable location where the rugged rover SherpaTT can lower the compact Coyote using a hoist. Once it has reached the ground, the agile robot decouples from the cable and docking mechanism, explores the cave, and then returns to the docking station to transmit the data. For this complex scenario, the first step will be to test the individual components and mission sections in Lanzarote, followed by a run-through demonstration of the overall mission.

In summer 2022, the company GMV Aerospace and Defence SA and the Santa Bárbara Foundation have already conducted field tests in a mine in northern Spain with the aim of demonstrating the functionality of the SRC technologies in a terrestrial scenario. A rover and a drone from the Spanish GMV were used to inspect mining tunnels. In close cooperation, the systems succeeded in inspecting a shaft after an explosion to rule out possible hazards to humans.

Other partners in the CoRob-X project include Laboratoire ATMosphères et Observations Spatiales (LATMOS) and Magellium SAS from France, the University of Malaga, Sintef AS from Norway and Airbus Defence and Space GmbH from Germany.

For all those who want to stay up to date on the field tests, DFKI project members Thomas Vögele and Tom Becker will regularly report on current events in a multimedia Field Trials Blog. 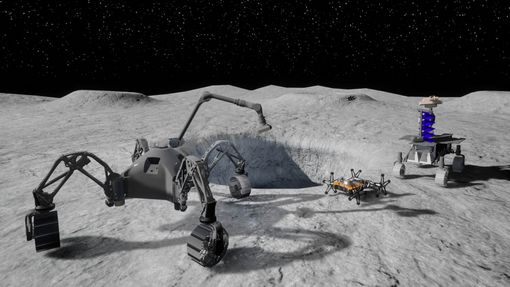 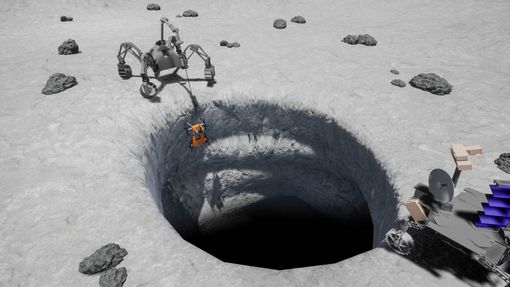 By rappelling down the compact Coyote III, the heterogeneous robot team manages to reach the inside of the cave.