The European data platform Gaia-X is shaping up in a practical way. Factory pioneers in Kaiserslautern have begun the setup of networked production at three locations: SmartFactory-KL (SF-KL), DFKI (IFS), and TU Kaiserslautern (WSKL Department). "Each part of the organization brings its own special expertise," said Prof. Martin Ruskowski, Chairman of the Technology Initiative SmartFactory-KL. "We see networking as the practical key to the technical implementation of Gaia-X in production." The German Federal Ministry of Economics and Technology selected SmartFactory-KL as a testbed for production for two reasons: "Our vision of Production Level 4 described the principles for the use of Gaia-X in 2019 and our Production Level 4 demonstrator, by which we successfully presented a possible Gaia-X use case in 2020," said Ruskowski. 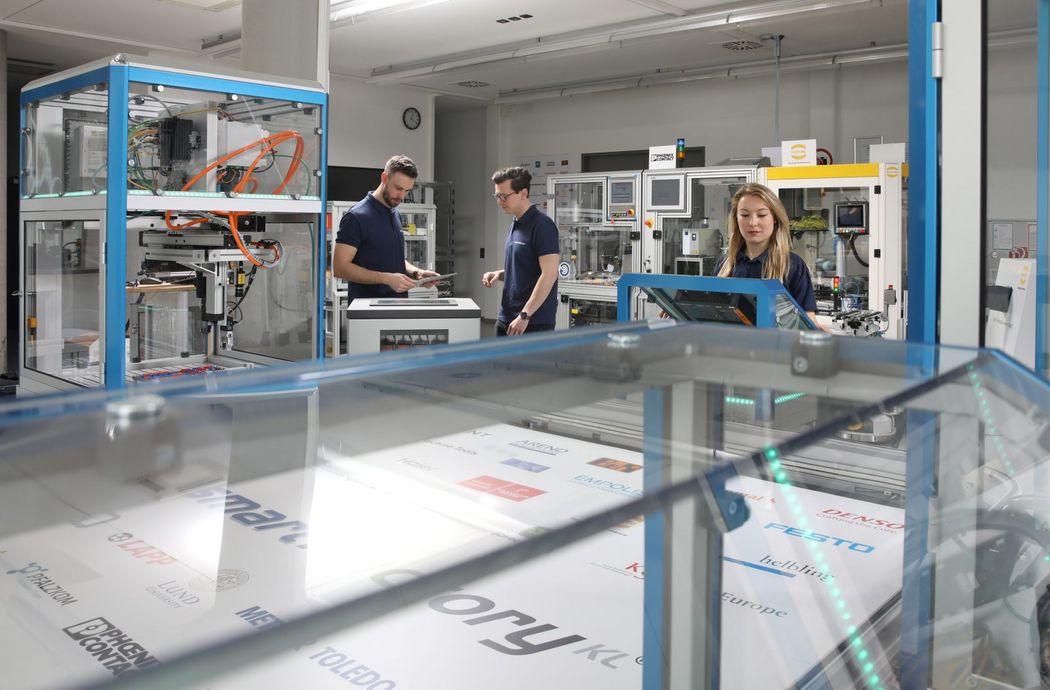 Shared production is the future

Scientists have applied the concept of a shared economy to Production Level 4 (PL4), the production of tomorrow, where machine modules are interconnected and their skills offered via a data platform. Products can be manufactured by companies using the integrated system, which enables purchasing the particular manufacturing capabilities that are required, but lacking in their own plant. "These options open up a completely new world of possibilities," said Ruskowski and then explained: "First, a company can now take the order even though they don't own a particular machine. Second, unused machines can be reserved by others, significantly reducing idle plant time – similar to the idea of car sharing."

smartMA-X is developing the technical details

"We start with an idea of how a shared economy should work," said Keran Sivalingam, Project Leader at smartMA-X. "The technical implementation, however, is uncharted territory that calls for skilled scientific engineering. At this point, I am glad that we can draw on so many different experts from SmartFactory-KL, DFKI, and TU Kaiserslautern!" Each of the three organizations represents a technical component, a manufacturing skill, or a service. Together they form the future testbed for networked production. The Production Level 4 demonstrator is already functioning in the Innovation Lab at SmartFactory-KL. A second demonstrator with a completely new transport system is under construction at the DFKI building. The Institute of Manufacturing Technology and Production Systems at TU Kaiserslautern will be linked to milling machines that can produce custom-made machined components. "Every machine or service is part of a data network as emphasized in the Gaia-X concept. It doesn't matter which manufacturer technically operates it. The network creates a data space where data can be safely and confidently exchanged," said Sivalingam. "We are looking at ways to implement this data room, while primarily focusing on the needs and requirements of industry."

"We have the advantage of having more than 40 scientists co-located here as visionary thinkers," said Ruskowski. "We can pool their expertise and focus on pressing research questions, for example, in the context of shared production. The TU brings knowledge in the area of robotics, 5G and autonomous vehicles; DFKI contributes research strength in AI and multi-agent systems; while SmartFactory-KL organizes additional working groups with its industry partners where ideas are subjected to a reality check." This has been the case ever since our founding in 2005. Visionary thinkers at factories have been building production facilities to technically verify the feasibility of our theoretical assumptions since 2014.

Researching today what is needed for tomorrow

One example is the EU project called MAS4AI. "Networked production demands a rapid and flexible planning capability," said Ruskowski. This implies a need for software agents or production bots that can orchestrate the transport and manufacturing tasks in a flexible production network." This is the goal of 17 collaborating project partners across Europe. The factory pioneers have special links to two industry partners. "Two of my PhD candidates are concentrating on the topic of multi-agent systems. One is working closely with Volkswagen, the other with Flexis," said Ruskowski. "This ensures that our development effort is constantly reflected in company operations, which precludes our research leading us into a dead end." How the exchange and collaboration works in practice is presented monthly by SmartFactory-KL in the YouTube format on SmartFactory-KL LIVE. "The May edition of the show features multi-agent systems," said Ruskowski. "We think it is important to share our knowledge and approach to problems and invite public discussion and comment. Our work is not secret; rather we want to find solutions together with our partners that are also useful to society in general." Many companies find it difficult to think long term, to develop their vision, and to introduce innovations. "Many remain prisoner to old and obsolete ideas. Just think of the subject of sustainability. The practical necessity of it is well understood by everyone today. But, it has been a long time coming," admits Ruskowski. Medium-sized companies are often much more willing to experiment than the big ones.

Machine data is at the crux of the matter

Similar to sustainability, the same applies to the topic of machine data. Gaia-X is intended to serve as a secure data framework. Nevertheless, companies remain skeptical about sharing their machine data. "Of course, the data may reveal something, for example, the fact that a machine is very energy efficient," said Ruskowski. Such information can in fact be used under some circumstances to derive production costs. Many companies fear that the knowledge could be used by the competition. We see it more positively: others may benefit from the knowledge and learn how to save energy, whereby everyone profits! Factory pioneers are guided by the principle: Work with each other instead of against each other."

SmartFactoryKL refers to a research and industry network supported by three pillars – a non-profit association which is joined by two research institutes. Membership in the Technology-Initiative SmartFactory KL association is open to research institutes and industrial companies. The association explores the issues related to industrial manufacturing being studied at the research unit Innovative Factory Systems at DFKI and at the Department of Machine Tools and Controls (WSKL) at TU Kaiserslautern. Since 2019, the responsible person for organization and content has been Prof. Martin Ruskowski. He is the chairman of the association's board of directors, head of the DFKI research department, and faculty chair. SmartFactoryKL brings stakeholders from industry and research together in a unique Industrie 4.0 network, to facilitate collaboration on joint projects to develop and implement concepts for the factory of the future. The manufacturer-independent demonstration and research platform enables joint testing of innovative production technologies by industry representatives and researchers in a realistic factory environment. In 2016, the German Federal Ministry for Economic Affairs and Energy (BMWi) officially recognized SmartFactoryKL as the Mittelstand 4.0 (SME 4.0) Competence Center Kaiserslautern. In 2019, the network revisited the concepts of Industrie 4.0, which resulted in the upgrade now known as Production Level 4 (PL4), and in 2020, SmartFactoryKL introduced the world's first PL4 Demonstrator, where the goal of autonomous production will be continuously advanced in the coming years. Since 2020, the association has also participated in the European GAIA-X network research project smartMA-X, where the PL4 demonstrator plays a major role in the European project. The Technology Initiative SmartFactory KL is also a founding member of SmartFactory-EU.