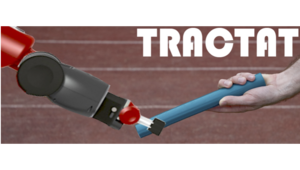 The TRACTAT project aims to lay the foundation for a smooth and effective Transfer of Control (ToC) between autonomous systems and humans in cyber-physical environments.

Autonomous systems, like self-driving cars and collaborative robots, must occasionally ask people around themfor help in anomalous situations. TRACTAT lays the foundations for a new generation of interaction platforms thatprovide a comprehensive multimodal presentation of the current situation in real-time, so that a smooth Transfer of Control (ToC) back and forth between human agents and autonomous AI systems is guaranteed. Such an interactionplatform includes explicit models of the attentional and cognitive state of the human agents as well as a dynamicmodel of the cyber-physical environment, and supports massive multimodality.

Recent developments in the field of autonomous systems lead to a closer cooperation between man and machine.Instead of industrial robots working in cages or behind barriers, they now start working hand in hand with humanworkers. Already today, the autopilot of Tesla’s Model S is a step away from mere driver assistance systems andtowards autonomous self-driving cars. However, the term “autonomous system” is not restricted to robots or cars,but also applies to pure software agents. Whatever their form, this new generation of intelligent systems mustbe designed to adapt dynamically to their users and changing environments. This will be achieved by replacingpredefined workflows and manual reconfiguration with machine learning and algorithmic planning of actions, where several information sources–such as user and environment data, information fromother systems, and digital services–must be taken into account. As these systems lack common sense, social andemotional intelligence and intuition, they will not replace humans, but only support them. Thus, when humans and autonomous systems are working jointly, it is generally desirable for them to support each other in critical situations, taking over where one agentcannot continue. The reasons for handing over a task can be manifold, such as a situation that an autonomous system is unable to handle, or an unexpected break that a human needs to take. A prominent example is anautonomous car, where the passenger suddenly has to take over control of the steering wheel to prevent an accident (fast Transfer of Control). Production workflows are often designed with that concept in mind, keeping a dedicatedset of (usually human) reserve agents ready. One of the main challenges in this area that TRACTAT wants to tackle, is how to design and perform the actual Transfer of Control, and how to integrate it into an autonomous system’s planning. While some scenarios are straightforward in this regard, in this project, we want to focus on “gray” areas characterized by complex tasks and situations, where finding the ideal way to transfer control is not trivial. While Transfer of Control in autonomous driving has received some attention recently, we will concentrate on efficient Transfer of Control in Industrie 4.0 and retail scenarios.