How can high data rates be protected and transmitted with the lowest possible latency in an industrial environment? The ideal answer is the new 5G mobile technology, which is scheduled to be launched by 2020. The partner consortium behind the SmartFactory-KL Industrie 4.0 production plant will demonstrate a use case at Hannover Messe from April 23-27, 2018: an optical quality inspection is performed as the work piece is moved by the flexible transport system. Data is transmitted wirelessly by means of the 5G technology from the camera to the cloud for evaluation. Depending on the result, the product is moved to the next appropriate processing point. This solution is presented at the joint exhibit stand of SmartFactory-KL and the German Research Center for Artificial Intelligence (DFKI) in Hall 8, Stand D18. 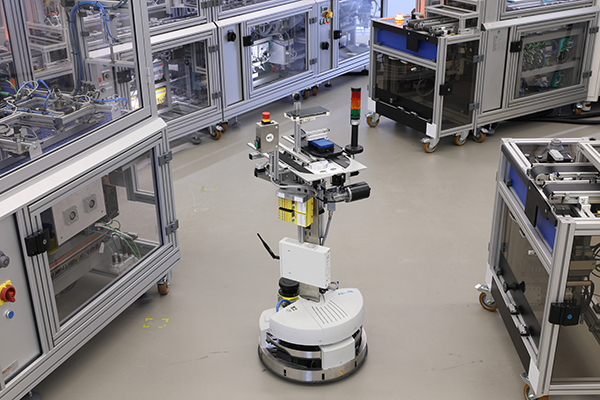 © SmartFactory-KL / A. Sell
One example of the use of 5G for the SmartFactory-KL Industrie 4.0 production plant is the optical quality control during transport operations.

“Wireless networks are becoming more important in highly flexible production plants where people and equipment are increasingly mobile. For the first time, thanks to 5G mobile wireless technology, secure, real-time radio links in protected frequency bands are possible. We are working on this innovative topic together with our partners in a collaborative network,” said Prof. Dr. Detlef Zühlke, Chairman of the Board at SmartFactoryKL.

The fifth-generation mobile radio technology (5G) supports high, mobile transfer rates: experts expect up to 20 gigabits per second. In contrast to the use of 4G (LTE), Wi-Fi or Bluetooth®, transmission can take place in a protected band, which is particularly relevant for industrial companies. Another 5G feature is the low latency of less than one millisecond, which allows the new technology to operate in near real time. The setup of wireless microcells with 5G technology provides ideal conditions for use in industrial machines and work units. The market maturity of this technology is expected to take another two years. Until that time, illustrative examples of applications are used for purposes of demonstration, as seen at SmartFactoryKL.

Use Case at SmartFactoryKL Industrie 4.0 plant: Quality assurance and production control during transport

At SmartFactoryKL, the partners have implemented optical quality controls in the flexible transport system (FTS) by retrofitting it with a camera. The product quality is checked while the product, a business card holder, is being transported from one production line to the next and the logistic dead time is put to productive use. The images are transferred to the cloud via 5G technology where they are checked by special evaluation software. The result of the quality control check is transmitted to the transport system and the FTS navigation is regulated accordingly: if all is well, the product arrives at the next production line for automated processing. On the other hand, if a fault is detected, the product can be redirected to the manual workstation for manual reworking. In day-to-day production operations, such an approach allows for the early detection of rejects and prevents the use of cost intensive manufacturing resources on bad parts. Furthermore, production efficiency increases.

Parallel to the quality control checks, the FTS scans the surrounding area during transport by means of the installed 360-degree camera. This data transmission is also only possible using a high bandwidth, which is the limiting factor for conventional wireless solutions such as Wi-Fi or Bluetooth®. Additional forms of added value during the transport process are also available. There are many ways to achieve added value and avoid dead time in logistics processes, for example, performing a software update or a 3-D print. Thanks to the use of new network management tools, the 5G technology now enables multiple applications to run simultaneously.

About the Technologie-Initiative SmartFactory KL e.V.
The SmartFactoryKLtechnology initiative was established as a non-profit organization in 2005, bringing together for the first time industrial and research partners in an Industrie 4.0 network to implement joint projects for the factories of the future. SmartFactoryKL is a unique, manufacturer-independent demonstrator and research vehicle located at the German Research Center for Artificial Intelligence (DFKI) in Kaiserslautern. Promising innovative Information and Communication Technologies (ICT) are evaluated and further developed in a realistic industrial production environment on site. Products and solutions as well as universal standards in the areas of Industrie 4.0 have already been developed at the technology initiative with the active participation of its members. Together with other regional competence suppliers, SmartFactoryKLwas recognized by the German Federal Ministry for Economic Affairs and Energy (BMWi) and designated as SME 4.0 Competence Centrum Kaiserslautern:
www.smartfactory.de 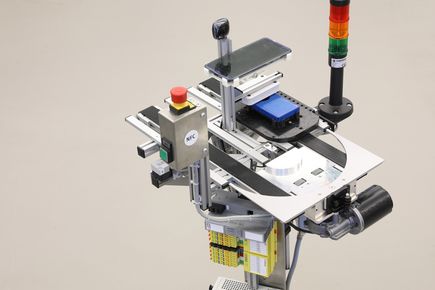 © SmartFactory-KL / A. Sell
SmartFactoryKL presents its new use case: Cameras for optical quality inspection and 360° scan, which are installed on the transport system, deliver high data volumes. Thanks to the innovative 5G technology, the data can be delivered to the cloud for evaluation. This allows for the “dead” product transport time to be used efficiently. 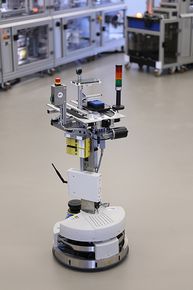