Not only do the production lines have to be flexible in the context of plug and produce for versatile production on demand. The associated infrastructure must also be more flexibly linked to the plant to supply the production modules. The partner consortium behind the SmartFactory-KL Industrie 4.0 production plant will present a solution where, for the first time, the data management of the production modules no longer resides in various infrastructure boxes, but instead, can be centrally managed. This is made possible through the use of edge devices. The application will be on display at the Hannover Messe from April 23-27, at the joint exhibit stand of SmartFactory-KL and the German Research Center for Artificial Intelligence (DFKI) in Hall 8, Stand D18. 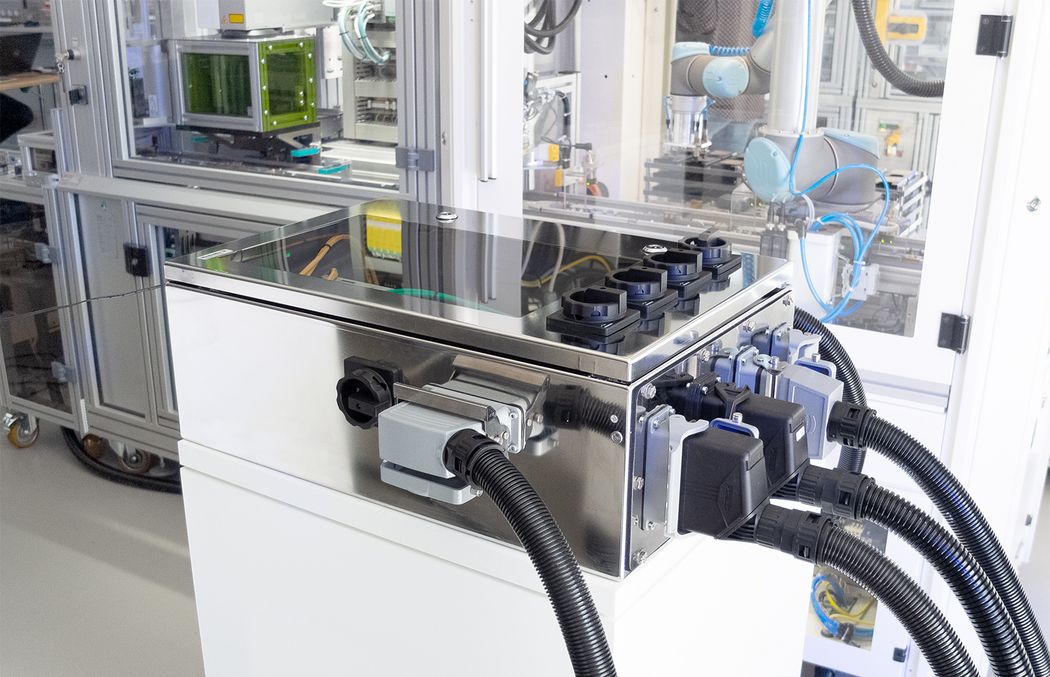 © SmartFactory-KL
The new infrastructure box allows for the data management to be centrally organized.

In the past, an infrastructure box supplied every two modules of the SmartFactoryKL production plant with all required media – electrical power, compressed air, industrial Ethernet. This year, for the first time, the partner consortium shows how a central box can take over the supply functions for a complete production line with up to four modules.

An additional simplification has been achieved in the area of data measurement: in the past data measurement and evaluation was done within the infrastructure boxes, whereas, this year a decentralized approach has been introduced. In this approach, edge devices are retrofitted as needed, on or in the individual modules, which supports the handling of the entire data management for the connected production modules. The edge device provides the data for the various services such as edge computing or data transfer to the cloud. Furthermore, the edge devices provide and make use of the administrative shells of the installed components within the manufacturing modules. In this way, the “intelligent” infrastructure moves closer to the production stations themselves.

Another Use Case: Contactless charging of flexible transport systems

In 2018, the flexible transport system (FTS) of the SmartFactoryKL Industrie 4.0 plant takes on additional, energy intensive functions, for example, optical quality assurance during product transport by means of 5G communication technologies. To accelerate the battery charging process and simplify the logistics, the FTS is recharged after reaching a docking station without any physical contact. The transfers between the production line and the transport system are used for the energy transmission process and ensure the long-term availability of the FTS.

Just as a modern Industrie 4.0 plant is adapted by quickly changing to meet the new requirements of production, the same should also be valid for the infrastructure. The SmartFactoryKL partner consortium set the course right from the start: In 2014, already in the first generation of the SmartFactoryKL production plant, all supply media – electrical power, compressed air, industrial Ethernet – could be connected by a single HDC plug, also known as the "All-in-One-Plug-In." The use of infrastructure boxes is made for double scalability: on the one hand, as related to the production modules and on the other hand, as related to the supply media.

Additional functions were offered in the next phase of development. Included among these, for example, are metering and supplying power via OPC UA, switching electrical current on or off at all inputs and outputs from the main switch, and firewall functions for data communication.
In addition, the SmartFactoryKL partner consortium introduced additional added value by means of a new infrastructure box. Specifically, diagnostic and communication capabilities were added to the unit. Consumption data for the connected module is measured by flow sensors, electricity meters, and network load monitors at the unit. The infrastructure box also checks the supply performance in various ways: the topology of the connected infrastructure boxes can be determined based on the data from the networked devices. From this, a fault tree is derived in the event of supply anomalies. Also, the pneumatic valves and contactors for the on/off switches for the supply media are monitored.

The diagnostic and communication capabilities of the infrastructure boxes as well as the expanded stage of the new infrastructure distribution box can be seen in connection with the recently installed edge devices at the Hannover Messe 2018.

The partners involved in the Industrie 4.0 demonstrator at SmartFactoryKL are:

About the Technologie-Initiative SmartFactory KL e.V.
The SmartFactoryKL technology initiative was established as a non-profit organization in 2005, bringing together for the first time industrial and research partners in an Industrie 4.0 network to implement joint projects for the factories of the future. SmartFactoryKL is a unique, manufacturer-independent demonstrator and research vehicle located at the German Research Center for Artificial Intelligence (DFKI) in Kaiserslautern. Promising innovative Information and Communication Technologies (ICT) are evaluated and further developed in a realistic industrial production environment on site. Products and solutions as well as universal standards in the areas of Industrie 4.0 have already been developed at the technology initiative with the active participation of its members. Together with other regional competence suppliers, SmartFactoryKL was recognized by the German Federal Ministry for Economic Affairs and Energy (BMWi) and designated as SME 4.0 Competence Centrum Kaiserslautern:
www.smartfactory.de 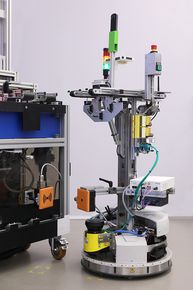 © SmartFactory-KL/A.Sell
The flexible transport system of the SmartFactoryKL Industrie 4.0 plant is always available – thanks to contact-free charging at the docking stations. 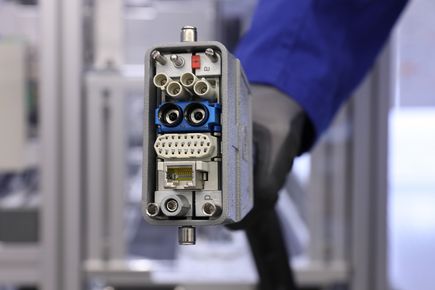 The infrastructure plug has been a regular element of the SmartFactoryKL Industrie 4.0 plant since the first generation.