How can production plants be safely and flexibly converted in terms of "plug & produce"? The answer is: with the help of an advanced modular safety concept. The partner consortium behind the SmartFactoryKL Industrie 4.0 production plant will present this concept at the Hannover Messe from April 23-27, 2018. Modular certification is possible from plant to component level and it significantly reduces the downtime in plant conversions. The solution can be seen at the joint exhibit stand of SmartFactoryKL and the German Research Center for Artificial Intelligence in Hall 8, Stand D18. 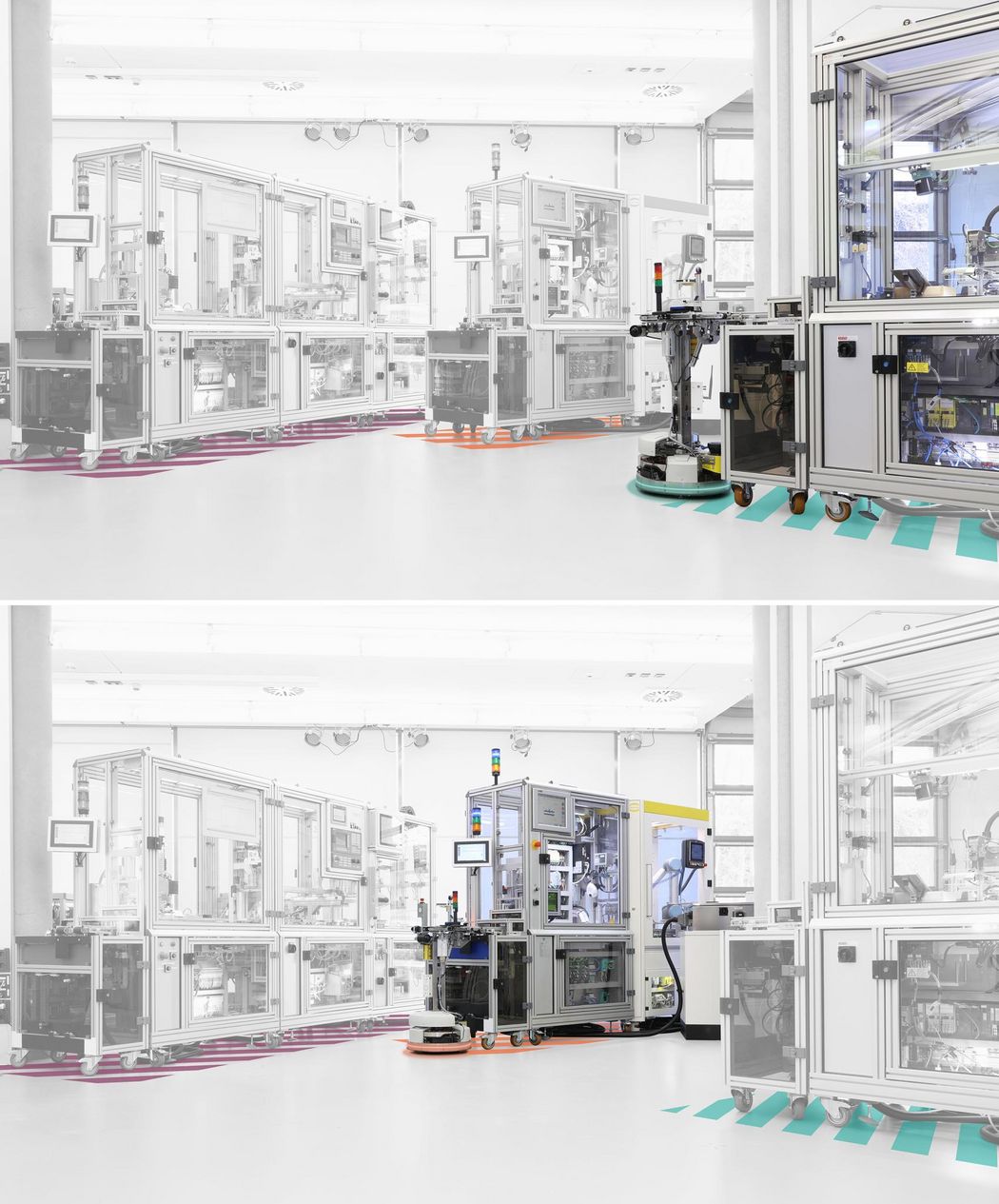 © SmartFactory-KL / A. Sell
Modular certification is the prerequisite for a fast and problem-free plant conversion in the context of Plug & Play as demonstrated at the SmartFactory-KL-Industrie 4.0 production plant.

Every system supplier must issue a conformity declaration confirming that all hazardous risk scenarios for the system have been addressed and the minimum safety requirements have been met. In the case of a modular plant of the future, after each conversion process conformity can be quickly confirmed only if a modular certification concept for the various plant variants is provided in advance. When an advanced certification is implemented in the sense of plug & produce, long downtimes can be avoided.

The flexible transport system (FTS) is now included in the modular safety concept of the SmartFactoryKL Industrie 4.0 facility for the first time. When the FTS moves into the zoned area of a production line, it is automatically assigned to this section of the plant and, consequently, also to this emergency stop loop. The use case clearly demonstrates the practical advantages of the extended safety concept for modular production systems: for example, instead of the FTS, a module component may be flexibly exchanged and automatically certified. The only requirement is for an existing safety profile for this component to be available.

Controlling modular certification via the cloud

The SmartFactoryKL facility demonstrates an additional innovation: the extended safety concept is now controlled in real time in the cloud via standard 5G wireless communication. This enables the deterministic communication required for certification. A digital twin of all modules is stored in the cloud along with various safety parameters. If a new module configuration is set up, a comparison is carried out with the aid of IT-based scenarios. If the configuration is already known to be safe, the conformity of the new configuration is confirmed.

“The advantage of this solution is the significant reduction in downtime resulting from a plant conversion, because artificial intelligence is managing the most costly and time-consuming safety decisions concerning the plant. We conceptually demonstrate automatic certification in the cloud at our stand,” said Prof. Dr. Detlef Zühlke, CEO of SmartFactoryKL.

The SmartFactoryKL technology initiative was established as a non-profit organization in 2005, bringing together for the first time industrial and research partners in an Industrie 4.0 network to implement joint projects for the factories of the future. SmartFactoryKL is a unique, manufacturer-independent demonstrator and research vehicle located at the German Research Center for Artificial Intelligence (DFKI) in Kaiserslautern. Promising innovative Information and Communication Technologies (ICT) are evaluated and further developed in a realistic industrial production environment on site. Products and solutions as well as universal standards in the areas of Industrie 4.0 have already been developed at the technology initiative with the active participation of its members. Together with other regional competence suppliers, SmartFactoryKL was recognized by the German Federal Ministry for Economic Affairs and Energy (BMWi) and designated as SME 4.0 Competence Centrum Kaiserslautern: www.smartfactory.de/en

© SmartFactory-KL / A. Sell
Modular certification is the prerequisite for a fast and problem-free plant conversion in the context of Plug & Play as demonstrated at the SmartFactory-KL-Industrie 4.0 production plant.