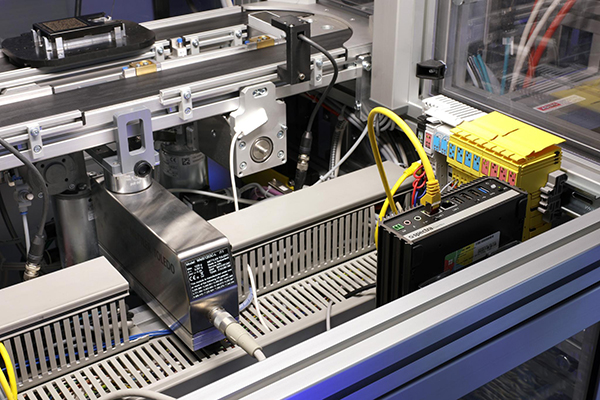 How can an existing work unit be digitalized? Many manufacturing companies see this as a major issue for the vertical integration and retrofitting of their existing brownfield systems. The partner consortium of SmartFactoryKL presents a variety of solutions on the Industrie 4.0 production plant exhibited at the joint stand of SmartFactoryKL and DFKI (Hall 8, Stand D18) at Hannover Messe Trade Fair from April 24-28, 2018. Various edge devices supplied by the partner companies are in use, but the task is always the same for the different technical designs: to collect condition data from the production machines, which is then forwarded via the existing integration level using a standard OPC UA communication protocol to the cloud platform for further processing. In the context of condition monitoring, conclusions can be drawn about the machines using smart data analytics which, for example, helps to predict when maintenance tasks should be performed.

The Industrie 4.0 production plant at SmartFactoryKL is basically designed for vertical integration, which is exactly the theme of this year's Hannover Messe. “In collaboration with our partners, we address current issues with regard for the further development of the manufacturing sector and the smart upgrading of brownfield systems,” said Prof. Dr. Detlef Zühlke, CEO of SmartFactoryKL. Whereas power consumption and various other system states were previously measured at externally connected infrastructure boxes, these can now be measured and recorded directly at the module. This is made possible through the use of edge devices.
Several edge device products have been installed in the Industrie 4.0 production plant. This maintains the plant's vendor-independent approach through the use of various edge devices supplied by different vendors. At the “south-bound interface” (interface to the controls), the partner companies have implemented different technical versions. In all cases, additional sensors ensure measurement of condition data like the flow of pressurized air in pneumatic actuators, power consumption by electrical consumers, or control data. All solutions have one thing in common - their IT connectivity or, the so called “north-bound interface” is achieved via standardized OPC UA, which is the communications protocol established by the SmartFactoryKL partner consortium. To maximize its value, data are converted at the integration level and sent for analysis via a secure MQTT protocol to the SmartFactoryKL cloud.

An example of the use of edge devices can be seen at the quality control weighing module. This module is where the customized business card holders are weighed to confirm proper use of component parts. The existing, older model scale does not record data nor is it OPC UA enabled. The module's manufacturer has therefore modified the existing scales by retrofitting an edge device that detects various condition data like temperature, overload or underload, and stabilization time. The device reads out and records the data detected by the sensors on the scale, compares it, and combines it in a status message via OPC UA to the cloud.

The stabilization time is a major criterion required to check the functionality of the scale. For example, if the stabilization time is outside the defined corridor, data analysis can provide insight into a malfunction in the scale itself or in the surrounding environment. The cause may be a sudden vibration from an adjacent motor or a contamination of the scale. In terms of predictive maintenance, maintenance tasks on the motor or the scale can be scheduled and performed as necessary, rather than waiting for some defined maintenance interval to act.

The advantages to the users of edge devices are listed below:

The advantages to the manufacturers of edge devices:

The partners in the Industrie 4.0 demonstrator at SmartFactoryKL are:

The vertical integration or digitalization of existing production units (brownfield) is made easy by retrofitting them with edge devices. The data already existing within the controls and modules are read out by sensors and collected via smart connectors (edge devices), routed into structured communication channels, and merged in IoT platforms or clouds. Vertical integration refers to the process of transporting and integrating machine condition data from the lowest sensor level to the cloud-based environment (condition monitoring). By making a multitude of machine data available, it becomes possible to extract information (data analytics) and to make assessments about machine conditions (predictive maintenance) in a way that was not possible in the past without a costly and risky intervention at the control level of the machines. In brief, vertical integration enables “insights” about the machines at the data level. The data allows conclusions to be drawn about the performance and condition of existing machines, modules, and systems which, ultimately, has a positive impact on parameters like product quality, productivity, and cost effectiveness.

The SmartFactory KL Technology Initiative was established as a non-profit organization in 2005, bringing together for the first time industrial and research partners in an Industrie 4.0 network to implement joint projects for the factories of the future. SmartFactoryKL is a unique, manufacturer-independent demonstrator and research vehicle located at the German Research Center for Artificial Intelligence (DFKI) in Kaiserslautern. Promising innovative Information and Communication Technologies (ICT) are evaluated and further developed in a realistic industrial production environment on site. The technology initiative has already developed products and solutions as well as universal standards in the areas of Industrie 4.0 with the active participation of its members. Together with other regional competence suppliers, SmartFactoryKL was recognized by the German Federal Ministry for Economic Affairs and Energy (BMWi) and designated as SME 4.0 Competence Centrum Kaiserslautern.
www.smartfactory.de 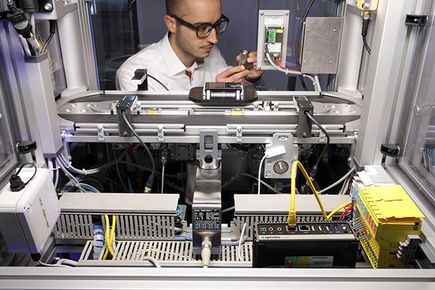